contribute today
Musicians turned entrepreneurs Sandeigh Kennedy and Drew Heaton have been collaborating for the better part of a decade.

When the pair first got together with electronic rock band Cedars, there was not a commercial recording space anywhere in New Braunfels, Kennedy said.

“We were recording in empty warehouses and spare bedrooms,” she said.

For the past few years, Kennedy and Heaton have serviced an area rich in music with Gruene Records, they said.

Launched in March 2017, the 3,000-square-foot space has multiple recording studios and isolation booths that can be utilized separately or together for larger recording groups.
RELATED STORIES

“There’s a lot of artists around this area, and music and art are so important to us,” Heaton said. “So much music happens here, and in our own lives music has been an important part in keeping us healthy.”

With multifunctionality in mind, Kennedy and Heaton have created a traditional recording space that can be transformed for live performances, acoustic artists, instrumental tracks and more, Kennedy said.

“Purposefully done and thoughtfully designed,” she said. “There’s not a single straight angle in this entire building. This space is made to capture sound, and we went to great lengths to do our best as musicians to think about every little detail.”

Kennedy and Heaton pride themselves on having a personal touch and a good relationship with musicians, and that extends to the recording space, they said.

Massive sound panels disguised as colorful paintings, comfortable couches and chairs are used to relax between sessions, and quality instruments and recording equipment are the highlight of each room at Gruene Records.

“At the end of the day making music is such an intimate thing,” Heaton said. “Having an environment where you feel comfortable working is probably the most important thing, along with the relationship you have with the people you’re working with.”

The construction is expected to last through April 30.

On Wednesday the county reported its third COVID-19-related death, as well as two new cases of the disease.

Social distancing could cause instances of child abuse to rise while children are no longer in regular contact with adults who normally report abuse. 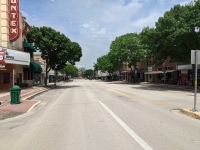 Eleven new cases were reported in Guadalupe County on April 6.