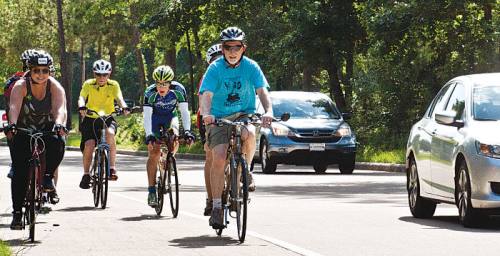 Cedar Park staffers have been working on projects that could make it easier for bicyclists to travel in the city.

Cedar Park has been pedaling forward with projects that may make it easier for cyclists to move about the city. Two of the city’s projects include identifying routes for dedicated bike lanes and testing out bike-friendly traffic signals.

Stephen Hanuscin, a Cedar Park senior engineer, said the city has been programming signal cabinets, or the technology that operates traffic signals, to distinguish between vehicles and bicycles. City staff is testing the technology at the Lakeline Boulevard and Little Elm Trail, Park Street and Vista Ridge Boulevard, and the Vista Ridge and Brushy Creek Road intersections.

“What [the signal cabinet] is going to do is extend the amount of green [light] time available if it detects a bike so that they have time to clear the intersection,” Hanuscin said.

Staff is replacing and upgrading the equipment that operates traffic signals, and he said it will take about two to three more years to finish upgrading citywide. Once the equipment is in place, he said city staff could begin to implement the bike-friendly technology to the new signal boxes.

In December Hanuscin also presented before Cedar Park City Council about creating more dedicated bike lanes, which are delineated by a solid white line and cannot be used by vehicles for any reason, such as decelerating, turning or parking.

Existing dedicated bike lanes in the city are along the Parmer Lane and Ronald Reagan Boulevard corridor, and Hanuscin said city staff has been actively identifying potential bicycle routes for more lanes.

“Given the current level of interest in cycling in Central Texas, including in Cedar Park, we’ve begun to recognize that it is time for us to take a look at expanding our bike lane network,” Hanuscin said.

He listed New Hope Drive, Brushy Creek, Little Elm and Buttercup Creek Boulevard, as well as sections of Park and Bagdad Road as possible bike lane projects that could be done in the short-term.

With council approval, Hanuscin said the city could start on these short-term projects and ultimately pursue long-term projects. Those would require more extensive work, such as pavement widening and off-street bike trails.

“If we follow these short-term projects and we’re satisfied with that and want to pursue long-term projects, then we will be able to achieve the kind of connectivity that would allow bicyclists to traverse Cedar Park and make connections to other cities and facilities,” he said.