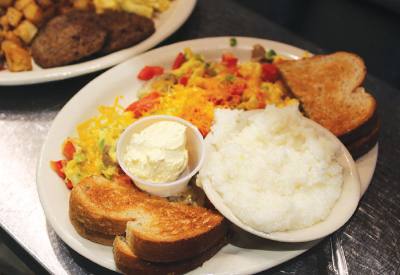 Eggs scrambled with green and red bell peppers, onions and mushrooms are served with sides. Plates of chicken fried bacon are served at 1431 Cafe seven days a week, and customers can also order staples such as pancakes and benedicts.

Owner Scotty Stroup said the variety of food offered is what makes the cafe great.

“Nobody has as many benedicts as we do,” he said. “If you eat here, you won’t ever eat [at a chain restaurant] again.”

1431 Cafe opened eight years ago and used to offer dinner, but Manager Rick Klaser said four years ago the cafe began to focus on breakfast and lunch. He described the menu as American comfort food made with quality ingredients.

“It’s all fresh,” Klaser said. “We use good bacon. We never use liquid eggs. Everything is scratch made.”

Benedicts are the most popular order, Klaser said, describing the chipotle hollandaise sauce as having a unique smoky, spicy taste without being too spicy.

The best-selling drink besides coffee and tea is the cafe’s signature Bloody Mary, and their homemade desserts such as cheesecake and peanut butter, coconut cream and chocolate cream pies are also popular.

“Customers tell us they get a lot of good food for a good price,” Klaser said.

Klaser described the atmosphere of the restaurant as particularly family friendly. He said some patrons eat at the cafe seven days a week, while some are loyal weekend regulars.

“That’s what is unique about Cedar Park—the growth is unbelievable, meaning we see new customers all the time,” he said. “We work to make sure their first visit is not their last visit. We want them to keep on coming in and join our extended family.”
SHARE THIS STORY