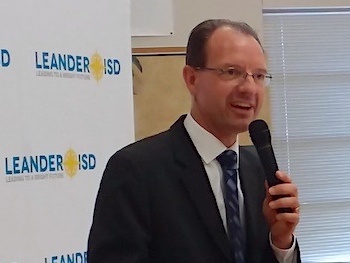 Incoming Leander ISD Superintendent Bruce Gearing is one of five finalists nominated for the 2019 State Superintendent of the Year Award, according to a press release from the Texas Association of School Boards.

Gearing is being nominated for his work as superintendent for Dripping Springs ISD, where he worked for the past seven years. He starts his job with LISD on Sept. 3.

Gearing has already been named the 2019 Region 13 Superintendent of the Year. While at DSISD, he oversaw 50% growth during his tenure in his district, according to a July 25 news release by LISD.

The other four finalists are: