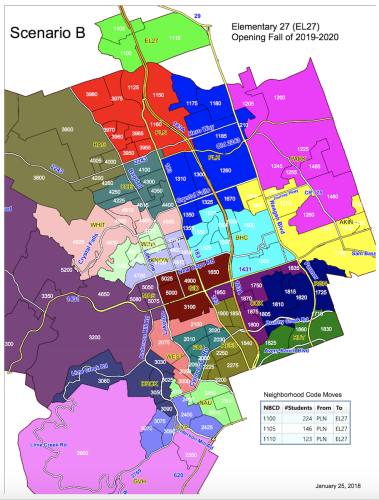 Two scenarios for attendance zoning for Leander ISD’s Elementary School No. 27 were presented to the board of trustees on Feb. 1.

In November district staff identified the Larkspur subdivision in northern Leander as the location for the new elementary school, which is scheduled to be complete by August 2019.

The first attendance zoning plan considered by the board would be expected to begin with approximately 621 students its first year, including children from Summerlyn, Larkspur, Grayson, Orchard Ridge, High Gabriel East, High Gabriel West and Bryson elementary schools, according to meeting documents. The scenario would alleviate crowding at Plain Elementary, which could serve over 1,000 students before another elementary school could offer relief, according to the documents.

The second option would not offer relief to Plain Elementary, and may start with approximately 493 children including those from Summerlyn, Larkspur, Grayson and Orchard Ridge, according to meeting documents.

“The biggest challenge when we’re doing the zoning is looking ahead of time, where we’re not going to be rezoning families back to back and try to minimize that,” said Jimmy Disler, chief facilities and operations officer for LISD.

Under the first attendance zoning option, some students could be moved a second time when Elementary No. 28 or 29 are opened, according to meeting documents.

“Just going through many of these attendance boundaries, it’s best not to move kids,” LISD Trustee Grace Barber-Jordan said.

The district posted both preliminary zoning options online for public feedback. Final decisions will be made at a later date.

According to Jan. 18 meeting documents the tentative timeline for the attendance zoning process includes: