‘Leanderthal Lady’ lives on decades after her discovery 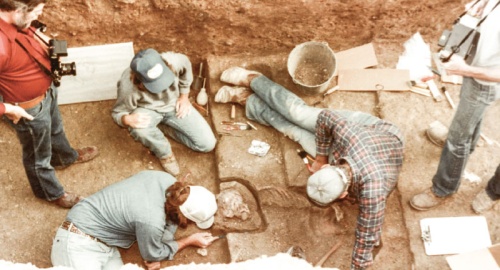 Archeologists uncovered Leanne the Leanderthal Lady in 1982. She was not old enough to be a Neanderthal.

It was nearing the end of December 1982 when Karen Thompson got the call.


Prior to the construction of RM 1431 in Cedar Park, archeologists from the Texas Department of Transportation uncovered the remains of a human female born thousands of years ago. Thompson, a local historian, headed to the scene.

“I got up there and they had pretty much covered it with plastic or something to be sure nothing happened to it,” Thompson said. “They were wanting everyone to stand back and get away.”

The discovery turned out to be one of the oldest and most complete human skeleton finds in North America, according to Texas Beyond History, a service of the Texas Archeological Research Laboratory at The University of Texas at Austin. Carbon dating found she was 10,000-13,000 years old. Due to her proximity to the city of Leander, she became known as the “Leanderthal Lady.” Today, her legacy continues in local commerce and through a historical marker.

“We need to have a feeling of what [life was like] back then,” said Thompson, who is chair of the Leander Historical Preservation Commission. “It gives us a great sense of belonging to a certain community.”

Many Leander drivers pass the Leanderthal Lady historical plaque on US 183 every day. It says Leanne, as she is often nicknamed, was about 5 feet, 3 inches tall and around age 30 at the time of her death. About six miles northwest from where she was found, the marker declares “the site is a valuable source of information on the nation’s prehistoric past.”

Though little is known about the life Leanne led, certain clues give insight into what her existence may have been like. Thompson said she was buried with great care. Several objects were found laid around her including a grinding stone—a tool she likely used to grind some type of grains—and a shark’s tooth.

“I guess a shark’s tooth means that they were down by the coast, or somebody killed a shark and brought it up here to give or trade with the Indians here,” Thompson said.

The site where she was found is called the Wilson-Leonard Brushy Creek Site, located in southwestern Williamson County. TxDOT discovered the site in the 1970s during a survey of the area in advance of the extension of RM 1431 to I-35. The site contains evidence from ancient people throughout prehistoric time periods in Texas, according to Texas Beyond History.

Thompson said Brushy Creek drew ancient dwellers due to the resources it provided: tree limbs to build fire, rocks to make tools, clams to eat and water to drink.

Flash forward to 2019 and the story of the Leanderthal Lady is inscribed on every bottle of vodka Scott Calame began producing in 2016. An avid homebrewer, Calame started selling Leanderthal Vodka through his company Square Peg Distilling.

“I will joke that ‘Leanderthal’ is ... what people in Austin refer to people who live in Leander as,” Calame said. “So when I had the opportunity to name our vodka Leanderthal Vodka and give a tip of the hat to Leanne and that discovery, it was also sort of reclaiming that term on behalf of Leander.”

Calame changed the name of his company to Leanderthal Distilling in 2018. The company registered a trademark with the U.S. Patent and Trademark Office for the name “Leanderthal.” Calame said naming “[his] spirits after [Leanne’s spirit]” is a way of honoring the discovery.

“Most of the people I encounter have heard the name, but they don’t know the history,” Calame said. “We embraced the history and did the research. We didn’t invent the term [Leanderthal], but we are acknowledging how it did actually get invented.”

These days Leanne the Leanderthal Lady is kept at the Texas Archeological Research Laboratory at The University of Texas’ J.J. Pickle Research Campus in Austin.