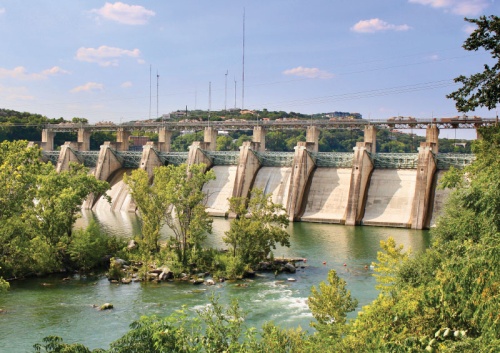 The Lower Colorado River Authority is in the midst of its first sunset review, which could result in the Texas Legislature mandating the entity make changes to its performance and mission.

According to the Texas Sunset Advisory Commission, the sunset process involves assessing a state agency or program and making recommendations to the Texas Legislature.

Organizations such as nonprofit Central Texas Water Coalition see the sunset process as an opportunity to invoke change. The cities of Cedar Park and Leander, which both buy water from the LCRA, have both expressed support of the river authority’s processes.

The LCRA came into existence in 1935 by an act of the Legislature. It was created to address the flooding of the Colorado River and to provide a source of reliable water and generate electricity through a series of dams.

A water supply reservoir is a body of water designated for supply, meaning it is going to fluctuate in elevation, Lauderback said. The rest of the Highland Lakes are considered pass-through reservoirs, and their elevation tends to remain more consistent.

“[Supply reservoirs] are designed because we live in Central Texas where there are two phenomena—we are either in periods of drought, or we are in periods of a lot of rain,” he said. “When it is raining, we must have the ability to capture that water and hold it so it is available to us when it is dry like it is now. We suck water out of those two reservoirs and they go down—it’s a natural phenomenon. And we use a lot [of water]. We’re a growing area of the state, and we consume a good deal of water.”


Blame it on the rain

The problem is, the supply reservoirs are not refilling at a high rate.

“The challenge of relying on reservoirs, or surface waters, is that you’re relying on rainfall,” Lauderback said.

He said water consumption is up and it is hotter this year so the lakes are losing more water to evaporation.

“We have less water coming in by way of inflows, and meanwhile we have more water going out,” Lauderback said. However, meteorologists are predicting a wet fall, he added, which will help refill the lakes and contribute to what he said is the natural cycle according to historical data.

Jo Karr Tedder, president and founder of the CTWC, said looking at historical averages is no longer effective when it comes to water-management planning. She said the coalition is concerned that the inflows are not happening like before, yet large amounts of water continue to be sold.

“The weather has changed,” Tedder said. “Previously you couldn’t say climate change, but it doesn’t matter what you call it; we’re not getting the water we used to, so we cannot continue doing things the way we used to.”

Tedder formed the CTWC in 2011 after witnessing the creation of the LCRA’s 2010 water-management plan.

“It was evident really quickly they don’t give much credence to the need to conserve water in Central Texas,” she said. “So I formed CTWC to provide a voice to protect our water. We meet regularly with the LCRA, and they are always professional, but nothing changes.”


Local history with the LCRA

The LCRA became Cedar Park’s water supplier when the city was incorporated in 1973, and Leander started purchasing water from the LCRA in the early 2000s.

The LCRA measures water in acre-feet; 1 acre-foot is equal to the volume of water 1 foot deep and 1 acre in area. In 2017, the city of Cedar Park used 14,851 acre-feet of water, and Leander used 6,762 acre-feet. Neu said Leander also reserves water for future growth.

Leander increased its Lake Travis raw water reserve up to 24,000 acre-feet per year in 2007 largely because of consistent increases in water demand due to population growth, he said.

Neu said Leander’s gallons per capita of daily water use, or GPCD, the amount of water one person uses per day  when averaged over one year, has dropped in the past few years. Leander’s GPCD was 138 in 2012 and decreased each year to 108 GPCD in 2017. During that time, the city’s population increased by 112 percent. Neu said new construction could be a factor because new infrastructure can process water more efficiently.

“At the same time, we’ve also seen a greater emphasis on water conservation from municipalities, such as recommended watering schedules and drought contingency plans, that have helped to reduce consumption per capita in many areas,” he said.

“The [GPCD] in Cedar Park has a direct correlation with the watering stage being observed by the city,” Huerta said. “As the watering frequency decreases with more stringent stages, GPCD decreases as well.”

The sunset review is an opportunity for the LCRA to be evaluated “from top to bottom” for the first time, Tedder said.

“While I understand the business component [of the LCRA], they’re also stewards of the water,” she said. “Ninety-five percent of their money is coming from electricity generation and transmission, yet they were designed to protect our water. We do not think that is happening.”

Sunset staff will issue a preliminary report in October. The LCRA will have an opportunity to comment on the data found, and then a final report will be issued.

Unlike other agencies that undergo a sunset review, river authorities cannot be completely disbanded, or “sunset,” by the Legislature but would be subject to any recommended changes approved.

Neither Cedar Park nor Leander plan to provide public testimony in the sunset review, but Huerta said some Highland Lakes firm water customers met with review staff to provide input and answer questions. Neu said Leander supports the sunset review process and LCRA’s role in managing water for the region.

Lauderback called the sunset process a “very public process.” He said it is good, thorough and makes everyone think.