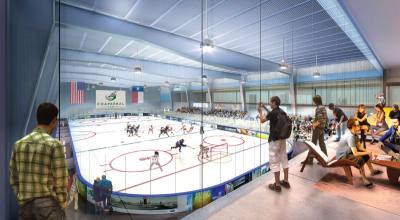 A rendering shows the seating area of an indoor ice rink at the proposed iSports Training and Performance Center.

Cedar Park City Council approved a rezoning and a special-use permit for the sports facility during a meeting Aug. 23.

Cedar Park residents could soon see a new facility accommodating both indoor and outdoor sports activities, augmented and virtual reality experiences, and family entertainment at the southeast corner of Scottsdale Drive and Toll 183A.

The 157,000-square-foot facility, named iSports Training and Performance Center, is scheduled to break ground in fall 2018 and open between early fall 2019 and January 2020, said Eric Perardi, principal of iSports Real Estate Development. Envisioned as a medical sports retail center, the facility will provide not only recreational sports activities but also sports training, retail, restaurants and sports medicine, according to a press release from iSports Real Estate Development.

The project went before the city’s planning and zoning commission July 17 and requested rezoning and a special-use permit, which was recommended by the commission unanimously. City Council held the first reading of the item Aug. 9 and will consider the second reading Aug. 23.

“[Cedar Park] is a family community, so anything that our kids and families use would be a big deal to us,” Van Arsdale said.

The Texas Stars is the American Hockey League affiliate of the NHL’s Dallas Stars and plays home games in Cedar Park. Michael Delay, chief sales and marketing officer of the team, said the team “support[s] projects that will increase ice availability and assist in growing the game of hockey in the Central Texas market” but does not have "formal ties to this development.”

The facility will also feature augmented and virtual reality experiences in sports provided by another tenant, Perardi said. The techniques are to help improve athletic performance by offering trainings on cognitive skills and muscle memory, he said.

The project is more than just a recreational sports center, Perardi said.

“This is much more geared towards … operators who are outstanding in their field,” he said. “We are putting them under one roof and allowing them to work together in a way that brings the best experience
for families.”

Perardi said he expects to create 100-150 permanent jobs inside the facility. The events the facility hosts would also benefit local retail, restaurants and hotels in the area, he said.

Kevin Lancaster, president of Cedar Park Economic Development Co. Type A Board, said the project would give a boost to the city’s tourism.

“We don’t have anything that is this significant up here,” Lancaster said. “Being able to host a variety of different tournaments … all that’s going to do is just continue to speak to our hotel industry and our wine-and-dine industry.”
SHARE THIS STORY