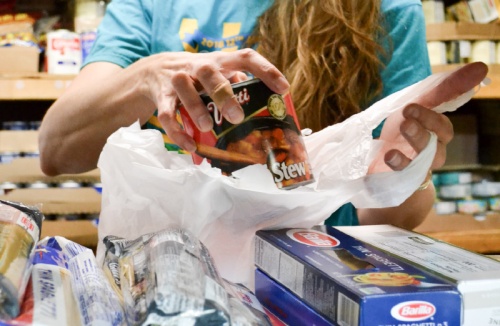 A volunteer at Hill Country Community Ministries in Leander handles food supplies. The nonprofit offers food for people in need.

On Tuesday mornings people file into a gymnasium at Twin Lakes Fellowship in Cedar Park to pick up food and clothing at Reveal Resource Center.

On a weekly basis the center sees more than 400 families, Executive Director Linda Starnes said. While the majority of the people the center serves are working poor, Starnes said some do not have a permanent residence.

Forty-eight-year-old John, who asked for his last name to be omitted, is a regular patron of Reveal Resource Center and has been living in his car in Cedar Park for the past four years. He said he moved to the area because it was safer than Austin, where his car was once broken into. He works odd jobs in construction to make money but not enough to afford a home in Williamson County. He used to live with his family in Bryan, Texas, but a series of family and health issues led him here.

“I had a normal life,” John said. “It just went upside down.”

In downtown Austin people line up outside the Austin Resource Center for the Homeless for a place to stay the night. In Williamson County, though, there is no conventional homeless shelter. Those experiencing homelessness may live in their car or temporarily stay with family or friends.

Executive director Tiesa Hollaway said when she first started working at HCCM three years ago, it served just over 1,000 people per month. Now the staff sees nearly 3,000 per month. In the last year Hollaway said she has seen a 79 percent increase in new families coming to the center.

“People are like, ‘How are you experiencing so much growth? We’re in this great economy, and the unemployment rate is low,’” Hollaway said. “And I’m like, ‘Well, our population is crazy growing, the cost of living is crazy growing, and there [are] minimal places for people to live.”

According to U.S. Census Bureau population estimates from March, Williamson County is the fifth-fastest growing county in Texas. Population growth has led to a jump in property values.

“There’s not a place for a family to go in Williamson County if they’re homeless,” Hollaway said. “It’s so sad.”

Brighter Days Food Pantry, based out of Leander Church of Christ, is open once a week.

Executive Director Terri Sue Bettis said the pantry sees about 100 people each week, about three of which are experiencing homelessness. Bettis said Brighter Days has also seen growth in the number of people it serves.

“The pantry has been open for 10 years, and it has grown tremendously,” Bettis said. “As the economy has changed, we are seeing veterans come in, too.”

Lori Traynham has been the homeless liaison for Leander ISD for the last two years. She works to provide resources to students who lack a permanent night-time residence.

Under the McKinney-Vento Homeless Assistance Act, a federal law that supports the rights of students experiencing homelessness, every district is required to assign a homeless liaison. The act is intended to ensure that any student lacking a fixed, adequate and regular nighttime residence is provided with resources.

Traynham said homelessness looks many different ways. Students could be unsheltered, living in a hotel, living in a shelter or transitional housing, or temporarily staying with other families.

“We could have two or three families in a home or even an apartment,” Traynham said.

Although this is rarer, she said sometimes she comes across families looking for shelter. She said this has happened about four times this school year so far.

“[Shelters in Travis County are] something we mention, but it is far and not ideal for kiddos,” Traynham said.

When students are identified as homeless, Traynham said school counselors and staff members working with the children are notified, since their housing situation could affect their academic performance.

“When they’re doubled up with another family, they might not have a place to do their homework,” Traynham said. “I’ve had stories of kiddos doing homework in a closet just to get some quiet.”

Connie Odom, Williamson County public affairs manager, said constructing a homeless shelter is not a core duty of the county, and homelessness is not something that has been discussed in Commissioners Court meetings. Odom said the county values the role that nonprofits and faith-based groups play in providing social services.

Funding homeless shelters happens in a variety of ways. In Austin for example, the ARCH is owned by the city and run by a nonprofit. One of Austin’s Salvation Army shelters, the Austin Shelter for Women and Children, is owned by the city, but the group’s Downtown Shelter is not. It gets funding primarily from private sources, according to Kelly Perkins, director of development for Austin Salvation Army.

While Williamson County does not have specific programs for the homeless, Odom said it offers grant funds to efforts such as Hope Alliance, a shelter for victims of domestic and sexual violence, and Habitat for Humanity.

The complex is owned and operated by the nonprofit Foundation Communities. The 120-unit complex provides reduced rents based on income, and 12 units are set aside for families experiencing homelessness as part of the nonprofit’s Children’s Home Initiative, which provides further reduced rents and case-management services.

Julian Huerta, deputy executive director of Foundation Communities, said the program has had an 85 percent success rate in recent years in getting families into a sustainable housing situation.

“For most of the families it’s more than just not having enough income to be able to afford to live someplace,” Huerta said. “Oftentimes there may be health issues or mental health issues or a family is fleeing domestic violence. We work on trying to identify those barriers.”

In Georgetown the Georgetown Public Library has begun addressing financial and housing needs. Two years ago the library hired Patrick Lloyd, a licensed social worker, to be the library’s community resources coordinator. He connects patrons in need with local resources.

Lloyd said the top needs he sees are financial assistance and affordable housing.

“We have no traditional emergency shelter in the county other than Hope Alliance ... which does not apply to everybody I work with,” Lloyd said.

He said his answers for individuals who need financial assistance for housing often include looking for ways to offset costs through agencies such as The Caring Place and Opportunities for Williamson and Burnet Counties. However, he said many have already exhausted those resources. For those who are unsheltered without any place to stay, the situation is more difficult.

Lloyd said the county government and local organizations should consider a system to address homelessness, which may or may not mean a physical shelter. He said this system could include providing those in need with case management and job training.

“I think that we need to ... do a real needs assessment on the issue of homelessness and housing challenges and have a third party give us some recommendations,” Lloyd said. “I think that would look something like the agencies that exist already working with perhaps agencies that don’t yet exist to create a clear continuum of care. ... Essentially just coordinating resources to assist folks while also giving them a safe place to lay their head at night.”

Since becoming homeless, John said he has been living day-to-day. He does not know where his next meal or job opportunity is coming from. He said a variety of factors, such as health and finances, have led to his situation, and he recognizes other members of the local homeless community also face multiple barriers.