Most MUDs in the Cedar Park-Leander area have higher property tax rates than the two cities, according to data.

David Flores was only 22 years old when he bought a house in Anderson Mill West, a municipal utility district, or MUD, south of Cedar Park, in 2004.

“To be honest, I didn’t have any clue that I was in an unincorporated area, what it meant to live in a [municipal utility district] or what that would mean for me and my family,” he said.

He, like most MUD homeowners, eventually learned about at least one difference: higher property tax rates.

“If you’re living in a [MUD], you are probably paying one of the highest taxes in the county, depending on which MUD you live in,” said Larry Gaddes, Williamson County’s tax assessor-collector.

According to Gaddes, property tax bills from the Williamson County tax assessor’s office were to be mailed out the week of this edition’s publication. He said tax rates can vary greatly based on where someone lives in Cedar Park and Leander—even what side of the street they are on.

A popular misconception is that homeowners who live inside city limits pay higher property taxes than those who do not, according to sources. While living in an unincorporated area might be cheaper in some regards—such as purchase price—property tax rates in MUDs are typically higher than they are for properties in Cedar Park and Leander city limits, according to Williamson and Travis County data.

A MUD is a taxing entity for a development outside of city limits. A MUD is governed by a board of directors elected by homeowners. The MUD has the power to tax residents and even issue bonds with homeowner approval, according to sources. The majority of the MUD tax rate is typically for infrastructure debt—paying for everything that links up the development to city or county services, from roads to water, officials said.

“From the development side of unincorporated areas, [developers] have to connect to city lines and that’s a huge capital investment,” said Romeo Manzanilla, the president-elect of the Austin Board of Realtors.

Over the years, as the development is completed, MUD tax rates typically go down. But Gaddes said it often takes 20 to 30 years until the rate drops below city levels.

And that is not the only tax rate facing MUD homeowners, who often have to pay an emergency service district tax to fund first responders, Gaddes said.

Not all MUD rates cost more than cities.

The Ranch at Cypress Creek and Williamson-Travis County MUD 1, two of the oldest MUDs in the Cedar Park-Leander area, charge lower tax rates—at $0.3425 and $0.4079, respectively— than nearby Cedar Park’s rate of $0.4470, according to Williamson County data.

Gaddes said the major reason for lower rates is that older MUDs have already paid most, if not all, the debt from capital projects during the MUD’s creation. The Ranch at Cypress Creek MUD 1 charges only $0.10 of debt, according to Gaddes, while the Williamson-Travis County MUD 1’s debt rate is below $0.10. The remaining tax revenue for each MUD goes to maintenance and operations.

But older doesn’t necessarily mean cheaper, according to Williamson County data. Created in 1982, Block House MUD, which contains the Block House Creek subdivision adjacent to the H-E-B Center at Cedar Park, charges a tax rate of $0.7810—more than $0.33 higher than Cedar Park’s rate.

Although the MUD tax rate of $1 is the highest in the Cedar-Park Leander area, Gaddes said some MUDs in Harris County have a $1.50 tax rate.

MUDs are just one of several types of jurisdictions in unincorporated areas, according to Leander spokesperson Michael Neu. Also called extraterritorial jurisdictions, or ETJs, unincorporated areas can purchase one or several services from one or more cities or counties. Others have homeowners associations, or HOAs, that help regulate the neighborhood and the services homeowners receive.

“There are hundreds of other properties scattered throughout [Leander’s] extraterritorial jurisdiction that aren’t within established subdivisions but also receive city of Leander fire services,” Neu said. “In some cases, these services are also reimbursed by Williamson County.”

Some MUDs, like Williamson-Travis County MUD 1, lie in two counties. Bruce Elfant, Travis County’s tax assessor-collector, declined comment on tax rates for this story, according to office spokesperson Kim Sue Lia Perkes, since “we are just the [tax] collectors.”

Flores says he is disappointed by the current Williamson-Travis County MUD 1’s Board of Directors and plans to run for a seat in November 2020. However, Flores admitted that MUDs do have their advantages.

“A MUD …  has the opportunity to be a vibrant democracy if neighbors are truly educated and enlisted in running it cooperatively,” he said.

Homeowners have diverse needs when buying a home, Manzanilla said. MUDs, and ETJs in general, can provide those options. Owning a home farther away from a shopping center can be an advantage or disadvantage, depending on the individual.

“It comes to the individual homeowner and what they’re looking for,” he said.

Some ETJs can be nicer than developments inside the city limits, according to Manzanilla.

“Driving through these areas, you wouldn’t even know that they’re unincorporated,” he said.

Sources did say that living in MUDs and other unincorporated areas can also mean greater distances to stores and schools, longer emergency response times and poorer road conditions.

Homeowners in MUDs and other ETJs can gain access to other city amenities, from libraries to youth leagues, but usually at a higher cost, officials said.

“[Leander] allows nonresidents to participate in recreation programming and use park amenities funded by parks and recreation fees,” Neu said, “but at higher rates than those charged to residents.”

Gaddes encourages those looking to buy a new home to “do your homework”—particularly when it comes to the property tax rate.

“A lot of buyers don’t know they’re buying a home that’s going to be taxed by a MUD,” he said. “There are definitely some benefits to being in a MUD, but if you’re concerned about tax rates, then go and research that.

Ali Linan and Kelsey Thompson contributed to this story.

Cedar Park chamber to host Coffee with the Council on Jan. 16

The Cedar Park Chamber of Commerce will host Coffee with the Council, an informal discussion with three members of the Cedar Park City Council, at 8 a.m. Jan. 16 at the chamber office at 1460 E. Whitestone Blvd, Ste. 180, Cedar Park.

Schools and businesses hosting children’s summer camps in Cedar Park and Leander are asked to submit information for possible publication the guide.

Local officials met Jan. 14 in Steiner Ranch to discuss how to deliver transit solutions to the city’s surrounding suburban areas. 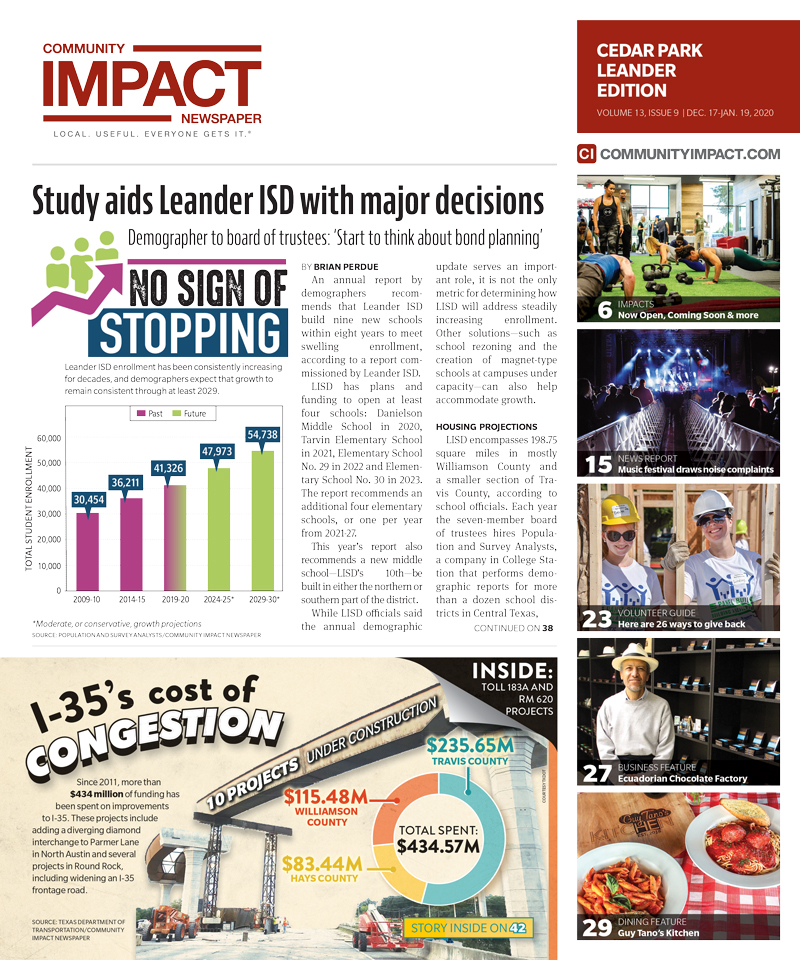