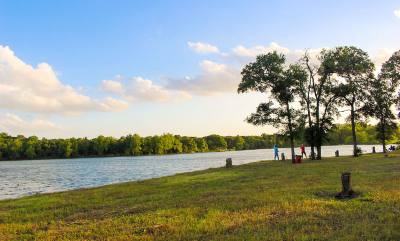 Lakewood Park is under construction and anticipated to open in spring 2020.

A performance stage is being added to Leander’s future Lakewood Park.

Leander City Council voted 4-3 Oct. 17 to add a stage pavilion to the park with an expenditure of no more than $1.5 million. The final cost and design have not yet been determined.

The stage would make Lakewood Park an ideal location for events such as Liberty Fest and other musical or theatrical performances, according to Leander Parks and Recreation Director Mark Tummons. Other potential uses include dance performances, poetry readings and comedy shows, Tummons said.

“There’s a lot of potential opportunity,” Tummons said. “This could be used in a variety of ways.”

It will also serve as a space for the community to gather informally when it is not in use, and it could be rented for corporate events or picnics, according to city documents.

Lakewood Park will have 250 parking spaces, according to Tummons. Tummons said Leander ISD, nearby churches and Capital Metro have parking spaces nearby that can be used during big events.

Tummons presented council with a few examples of possible designs for the project during the Oct. 17 meeting, but a final design will come back for council approval at a later date.

A performance stage was included in the original master plan for the park, but the stage was ultimately not selected to be included in the first phase of construction due to “park priorities and final funding,” according to city documents. However, the stage has continued to be a part of city staff discussions, according to city documents, and staff ultimately recommended council authorize the stage pavilion Oct. 17.

Shaw said he feels the pavilion project is being rushed and is fiscally irresponsible.

“If we want to do this, we need to give it to Leander and let them decide to put a stage out there,” Shaw said. “We need to do some studies, we need to see how busy that park is going to be before we spend this type of money.”

Funding for Lakewood Park has come from 2016 voter-approved bonds for park development and a Texas Parks & Wildlife grant.

Hill, who voted in favor of the recommendation, noted voters did approve bonds for Lakewood Park and other parks in the city. He said he thinks the city could maybe hold off on the future San Gabriel park and finish Lakewood Park the “right way.”

“I’d like to be fiscally responsible, and maybe we don’t get the gold-plated disc, but we get something that will provide shade and shelter for people performing,” Hill said. “To have a really nice park that you’re looking to have Liberty Fest in, performances in the park, things like that, to me, it’s worth it.”

Here are five Christmas events happening this weekend in Cedar Park and Leander.

The positive trap was found near Devine Lake Park.