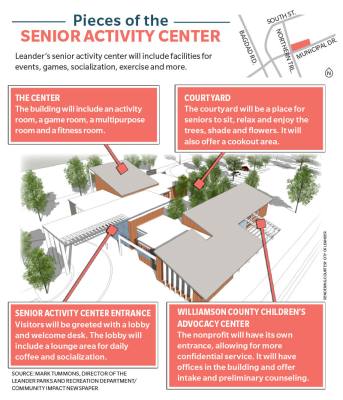 The senior citizen community will soon have a new place to socialize, learn new skills, exercise and play games in Leander.


Voters in the city passed a bond in 2016 that allocated up to $4.185 million for a new senior activity center. Now, three years later, construction is about to begin on that facility, which will be located next to the city’s Public Works Department building on Municipal Drive.

“If everything falls into place ... probably [in] the middle of August, first of September, we can break ground,” said Mark Tummons, director of the city of Leander’s Parks and Recreation Department. “We’re getting very close.”

After the approval of the bond, Leander put together an Active Adult Advisory Committee to assist in developing the center and creating programs and events, Tummons said.

“They’ve been an incredible help to us throughout the process,” he said.

He said his goal is to open the senior activity center in August 2020. The architect on the project—Houston-based international design firm PGAL—is in the process of completing the design for the facility, and Tummons said the city plans to go out to bid for a construction contractor June 1. The bidding could be a six-week process, and once city staff select a contractor, the recommendation will go to Leander City Council for approval.

The 12,000-square-foot center will feature a game room with opportunities for general socialization, such as cards or bridge, he said. An activity room could offer classes in fitness, chair exercises, cooking and nutrition, and health and wellness.

There will also be a fitness room with exercise equipment, a lobby area with room for lounging and talking over coffee, a courtyard garden and a multipurpose hall.

“The whole facility is really going to be incredible,” Tummons said.

He said the city plans to hire three full-time employees, a senior activity coordinator, a recreation specialist and a front desk administrative employee and will pull in instructors for specific classes and programs. The center’s hours and membership details have not been worked out yet, but Tummons said it will likely be open six to seven days a week, including hours early in the day and later at night during weekdays, at least.

Area seniors will share the space with the Williamson County Children’s Advocacy Center—which will have its own entrance and offices in the building—and Meals on Wheels. Tummons said the design includes a state-of-the-art commercial kitchen for the Meals on Wheels program, which will serve meals at the center and deliver out of the facility.