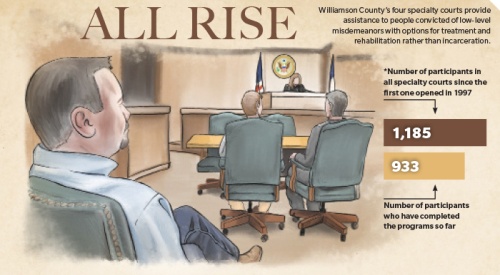 Since Williamson County established its veterans treatment court in 2015, the court has worked to provide a program that helps veterans accused of low-level crimes get back on track through case management and peer mentoring.

Mitch Fuller, senior vice commander for the Leander Veterans of Foreign War Post 10427, said the court is important for veterans. A veteran himself, Fuller said he recognizes people transitioning out of active duty may have physical and psychological wounds from their service that affect their actions.

“I think [the court] is a second chance,” Fuller said. ”You make a mistake, and it doesn’t affect the rest of [your] life.”

Alfaro said the program brings positive reinforcement to participants struggling to transition back into civilian life. The court addresses mental health and substance-abuse issues by providing resources many veterans may not know are available.

“They were under the impression that nobody cared about them,” Alfaro said about the program’s participants. “We prove to them that, ‘Hey, you are not forgotten.’”

Leander VFW Service Officer Gary Miller serves as a mentor. A Vietnam War veteran, Miller said he understands that coming out of regimented, structured life in the Army into regular life outside the Army is challenging and can cloud an individual’s judgment.

“It’s such a different world,” Miller said. “It’s not what they’re used to.”

Miller said as a mentor he spends time with veterans in the program, going to court with them, keeping them on track with meetings the court requires they attend and just talking with them on a regular basis. He said he has had one mentee graduate from the program and a current mentee is about to graduate. He said the experience is transformative.

“It’s pretty incredible,” Miller said. “There’s a difference in how they view their circumstances.”