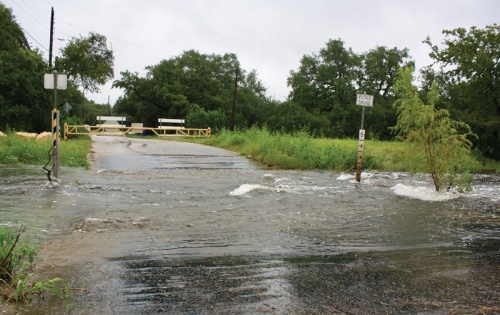 After years of compiling information and community input, the city of Cedar Park has prioritized areas around the city with known flooding issues. Areas along Block House Creek top the list, followed by Ranchettes Units 6 and 6A, the lower portion of Cluck Creek and Spanish Oak Creek.

The ranking, which consists of 18 project areas, is part of the city’s Stormwater Master Plan, which Cedar Park City Council unanimously approved March 28. The plan serves as a guide for implementing projects to improve flooding and drainage issues.

“Cedar Park is no stranger to flooding over the years,” said Emily Truman, the stormwater program manager for the city of Cedar Park. “The areas that experience flooding tend to be in parts of town that were developed before the city was incorporated.”

The ranking provided in the master plan is not the exact order in which projects must be completed, according to the document. The ranking is a tool that along with offering factors such as funding availability and grant potential, aids city staff in recommending projects to the City Council for approval. The prioritization process was based on criteria such as public safety and the number of developed structures and properties that are subject to potential flooding damage, according to city documents.

In addition to prioritizing project areas, city staff analyzed probable costs for each project area. The total cost for all projects is estimated to be $32.5 million.

The master plan approval is the latest step in the city’s efforts to improve flooding issues throughout Cedar Park. City staff identified priority project areas and developed associated costs with mitigating drainage issues in 2010, according to city documents. In 2017, the city hired consulting firm Freese and Nichols to help develop the city’s Stormwater Master Plan.

In order to fund drainage projects, the city pursued a sales tax reallocation election. In May 2018 voters approved a proposition redirecting a portion of sales tax revenue to fund a program that would address drainage and related street improvements.

Karen Wind, a Cedar Park resident who helped encourage people to vote in the election, said it is exciting to see the master plan completed and she is glad the ranking system put an emphasis on public safety.

“It’s been a long time coming,” Wind said. “The flooding problems aren’t going to go away overnight, but we have a plan in place now.”

Truman said city staff will now identify funding options to finance the first stormwater projects. She said the first project recommendations will be presented to council in the summer and design work will start shortly after.