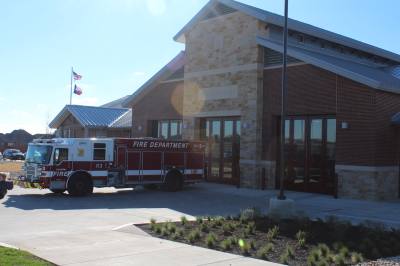 Leander Fire Department held the grand opening of Fire Station No. 1 on Jan. 19.

When now-retired Leander Fire Chief Bill Gardner first showed up to work as a volunteer firefighter in Leander in 2002, the city did not own its own water system. Sometimes the firefighters did not have enough water available to put out a fire. Other times, there was not enough equipment, such as gear and radios, to go around.

“[We had to rely] on our neighbors some [and modify] what we did,” Gardner said. “Sometimes things burned a whole lot more than you wanted them to.”

It was not until 2001 that the city hired its first six employees. Prior to that, only trained volunteer firefighters served the city. In 2002 the city hired its first fire chief. Since then, Leander has seen rapid population growth, and the fire department has grown with it. As of 2019, the department has a staff of 71 employees, 65 of whom are certified firefighters, serving a growing population of about 60,240. Four fire stations are spread around the city with a fifth one coming in the fall.

Keeping up with growth is important, said Gardner, since fire department ratings influence insurance premiums for homeowners and businesses. Over the years, the department has improved its rating significantly, and Gardner said the department is on track to improve it even more in the coming year.

The Insurance Services Office, an advisory organization that offers information about insurance risk, provides Public Protection Classification ratings. The score is based on a variety of factors, including water supply and the quality of a city’s emergency communications and fire department.

Between 2017 and 2018, the rating improved from a 3 to a 2. Only 1.1 percent of fire departments in the United States had received a 2 or better classification at the time, according to Gardner. Neighboring Cedar Park has an ISO rating of 1 within its city limits, according to the city’s website.

Although dependent on each individual’s insurance policy, the improved score in Leander could have meant as much as a $60 savings per year for homeowners and $400 savings per year for commercial businesses. To benefit from the savings, homeowners and businesses would likely have to alert insurance providers of the rating change, according to the Leander city website.

Gardner retired Feb. 15 after 15 years in the department. He said he expects the new fire chief will be able to improve the rating from a 2 to a 1 in the coming year with the addition of Fire Station No. 5. Gardner said the station, located in the Travisso neighborhood, is scheduled to be completed in the fall.

“To our businesses and to our industrial programs, they get a chance to see an improved cost there,” Gardner said. “Each insurance company is different. ...But to have an ISO of 1, have a fire station within 5 miles of your business and a fire hydrant within 400 feet of your business gives you the lowest insurance rate possible from that company for your business.”

The quality of the department, including staffing sizes, training,  proximity of firehouses to various locations in a city and response times all play a role in the ISO rating, Gardner said. Gardner said response times in Leander, which vary based on subdivision, have not improved much over time. He said the department has kept up with city growth.

“We weren’t losing ground,” Gardner said. “We just weren’t making any ground. That’s one of the things we want to do is start making up that ground to get [response times] better.”

“The organization is starting to get out there,” Curr said. “We’re seeing an increase in people wanting to work here.”

Gardner said he thinks several factors attracted experienced workers. This past year, the city raised salaries in the department by 7 percent. Another reason is the culture. Gardner said the department offers a cancer-reduction program, mental health support and college education support.

Gardner said diversity within the fire department is important. Of the new hires, 33 percent were considered a minority classification in the fire service, either due to their gender or race.

“It is crucial that our [community feels] comfortable with us there,” Gardner said. “By having a diverse staff, that gives them automatically someone they can relate to or be involved with.”

In January, the department held the grand opening of Fire Station No. 1, which had been relocated to West San Gabriel Parkway from its original location on North Brushy Street.

“There were probably 500 people at our fire station grand opening,” Gardner said. “People felt comfortable being there. It’s because we are part of something bigger.”

Leander resident Susan Holmes has lived in the city for the last nine years. Holmes said she has had positive experiences with the fire department. When the smoke alarms in her house stopped working properly, Holmes said she called the department, and a team came to her home within 30 minutes.

“They were not put out about having to come to my house and do that,” Holmes said. “They just came in and checked them, and they were all glad to do it.”

Looking back at his decision to come to Leander in the early 2000s at a time when the city had a small team, Gardner said he was excited to grow an organization at a grassroots level.

“As the city grew, we got to grow,” Gardner said. “For things to grow and flourish, they have to be cared for. That’s what we were able to do as part of that growth of the city: let people know we care.”