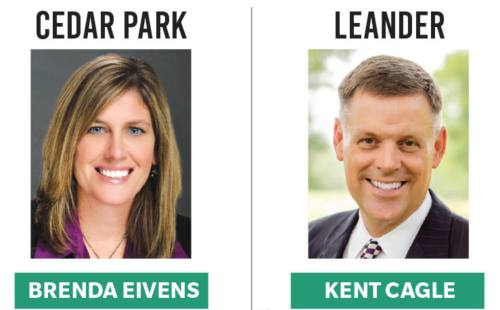 In November, Kent Cagle, city manager for the city of Leander, received a 3 percent raise, bringing his base salary up to $209,673.10.

In September, Brenda Eivens, city manager for the city of Cedar Park, received a 5 percent raise, bringing her base salary to $215,250.

“I believe personally that in the past it was almost an automatic raise,” Hill said. “I don’t think that’s appropriate. ... We should pay people well and support them 100 percent, but at the same time we need to expect the same kind of performance that the private sector expects.”

Both Leander and Cedar Park follow council-manager rule, a form of government in which voters elect city council members, who then hire a city manager to carry out the day-to-day city affairs.

Cagle said the arrangement is similar to how a board of directors interacts with a chief executive officer of a corporation.

“The mayor is like the chairman of the board, and the council is the board of directors, and the city manager is the CEO,” Cagle said. “The board—whether it’s city council or a board of directors—they set the policy and direction for the corporation and instruct the manager to carry it out.”

Eivens said that while the City Council envisions the policies and goals for the city, the city manager and staff implement those decisions. For example, in October, Cedar Park City Council adopted a set of strategic goals, which address issues such as sustainability, safety and development.

“Those helped identify objectives for achieving those goals,” Eivens said. “The staff then looks at what kind of strategies [we can] do to achieve those [goals].”

According to the Texas Municipal League handbook, typically city managers in Texas are appointed for an indefinite term, and city councils can dismiss them at any time.

Eivens has held her position in Cedar Park since 2006, though her employment with the city began a decade prior when she was hired as the human resources manager in 1996. She served as assistant city manager from 2003-05.

Cagle has been Leander’s city manager since 2011, after he was hired to replace Anthony “Biff” Johnson, who served from 2004 until his death in 2011. Prior to coming to Leander, Cagle served as the city manager of Duncanville, which is in the Dallas area, and worked in various roles for the cities of Lubbock, Carrollton and Plano.

Both city managers have seen the immense growth in their respective cities in the last decade. Cagle said that is the biggest issue he has had to deal with as city manager.

“You need more police officers and firefighters and any aspect of transportation, water and sewer. ...” Cagle said. “Every day is all about keeping up with growth in one manner or another.”

Eivens said as she has seen the population grow over the years in Cedar Park, she has also seen an increase in interactions between the public and the government. She said technology has allowed for more communication channels between residents and city government and led to faster response times.

“I feel some barriers are starting to go away, and people feel more empowered to reach out to the city staff and officials,” Eivens said.