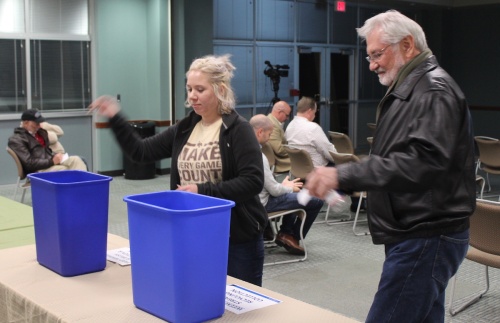 Participants in a public meeting held by the city of Cedar Park provide feedback on desired waste management services.

A handful of residents filed into the Cedar Park Recreation Center’s Community Room on Dec. 4 to share their thoughts on waste. As the night progressed, they chimed in with their perspectives on everything from recycling frequency to bulk trash pickup.

“I’m not unhappy with the system, but I definitely think there are things that can be improved,” said Felicia Thomas, a Cedar Park resident who attended the meeting.

The forum was the third in a series of public meetings the city held as part of its waste-diversion study, which examines the current waste-management system and how it can be improved. Cedar Park is working with engineering consulting firm Burns & McDonnell to develop a Residential Waste Diversion Master Plan to determine how the city will manage waste over the next 20 years.

The city’s contract with its current service provider, Cedar Park Disposal, ends in 2020, and the city will be rebidding the contract next year, said Daron Butler, the city’s managing director.

Butler said one of the focuses of the study is to see whether there are ways to increase the percentage of the city’s waste that is recycled.

“I think everybody would agree that [percentage] needs to go up,” Butler said. “The challenge is how can you do that without increasing the cost to the customer exponentially?”

An online survey conducted by the city and Burns & McDonnell reveals residents, too, are concerned about recycling. The survey, which had more than 1,000 participants, showed 74 percent of respondents feel it is extremely important for Cedar Park to develop or improve recycling, waste-reduction and reuse programs.

Butler said the push for recycling efforts in Cedar Park may have to do with the demographics of the city, which has a median age of 34.4 years.

“Folks that are that age, who are starting their careers and building their families, they came ... into being homeowners when recycling and environmental issues came kind of into the forefront of most people’s minds,” Butler said.

The city of Leander contracts with Al Clawson Disposal Inc., or ACDI, a family-owned company that services areas of Central Texas. ACDI collects trash for residents once a week and recycling every two weeks. The city made the switch from 18-gallon recycling bins to 95-gallon recycling carts for all Leander residential customers in 2014, according to Leander spokesperson Mike Neu.

Keeping up with growth

To keep up with new neighborhoods and businesses, both cities’ trash services had to grow. Adjustments have come in the form of adding more trucks and crews to service Cedar Park, Butler said. Clawson, too, said ACDI has had to add more trucks and service people to keep up with the growth in Leander.

As far as filling up landfills, though, Butler and Clawson said they do not have concerns about growth causing landfills to reach their capacity any time soon. There are no landfills in Cedar Park or Leander. Cedar Park Disposal takes its trash to the Austin Community Landfill run by Waste Management in East Austin. Waste Management spokesperson Lisa Doughty said the 241-acre landfill is estimated to have about 6.5 remaining years before it is full. Butler said if that one reaches capacity, trash can easily be taken to the Williamson County Landfill in Hutto.

ACDI takes Leander’s trash to the Williamson County Landfill, according to Clawson. Clawson said she is not worried about that landfill filling up soon. The 575-acre landfill, which is also run by Waste Management, has a life expectancy of about 112 years based on the current amount of waste coming in each year, according to Doughty. However, she said with the current growth the county is seeing, that number could be closer to 50 years.

Clawson said the current cost for Leander residents is $16.66 per month, up from $12.25 in 2008. The city keeps 10 percent of this cost to compensate itself for associated services such as collecting fees, according to Neu. Clawson said the biggest factors in the cost are labor, processing or disposal, and fuel.

According to city data, on average each household in Cedar Park annually puts more than 400 pounds of recycled material into its bins. How much is placed in bins, though, does not necessarily reflect how much material is actually recycled, Butler said.

Recycling amounts to about 18-20 percent of the total tonnage of waste that comes out of the community, Butler said. He said efforts can be made to increase that percentage, which is one thing the current waste-diversion study is examining.

A presentation at the Dec. 4 forum included options for potentially enhancing recycling collection. These include increasing collection frequency to every week, which means residents would not have to keep track of when their recycling weeks are, or offering another recycling cart for customers, which would not require more vehicles to be on the roads each week.

Cedar Park resident and Nextdoor user Tina Bonorden said she recycles as much as she can and wishes the city had weekly recycling pickup, which she would be willing to pay more for.

“We recycle in this household so much that we fill up our recycle bin twice as quickly as our regular trash,” Bonorden said. “For us, it would work much better if trash was only picked up once every two weeks.”

“It’s odd to me that recycling is every other week,” Blackwell said. “I can fill up the bin every week. … The only option we’ve been given is to get a whole other recycling bin, which is a lot of space to take up, so I do take things to other recycling places in my office when we get too overloaded so I can avoid putting stuff in the trash, but it’s sometimes difficult.”

Cedar Park resident Jim Bane said he would not want to pay more for weekly recycling, since his cart would only be half-full each week.

“I’ve been happy so far with the way things have been handled,” Bane said.

He said he would be fine with a price increase if efforts could be made to divert waste, such as yard waste, from landfills to recycling centers.

Currently, Leander and Cedar Park collect organic material, such as food scraps, leaves and branches, but take it to landfills. Recycling yard trimmings or brush would increase the percentage of waste that is recycled significantly in Cedar Park, Butler said.

“If we wanted to increase the percentage of recycling coming out of this community, recycling the brush would take us clearly into the 30 percent-plus range of recycling,” Butler said.

Leander and Cedar Park utilize single-stream recycling, which means residents do not have to sort their recycling by material type. Glass, paper, metals and plastics go into the same bin. As a resident, Bonorden said this is helpful.

“You’re going to get a better response from people on recycling if they don’t have to separate the paper from the glass from the plastic. …” Bonorden said. “People are lazy. They don’t want to have to go through all that trouble and have to think too much about it.”

Huerta said common misconceptions about recycling still exist. She said a common mistake is that people try to recycle pizza boxes, which are not accepted because they are contaminated with food. Clawson said one of ACDI’s goals for 2019 is to shed light on another common mistake: putting recycling in plastic trash bags, which will not be accepted.

The results of Cedar Park’s waste study will be presented to Cedar Park City Council in early 2019. The next option for Leander to renew its contract with ACDI is in 2021.

Bonorden said she has seen more people support recycling efforts within the community over the years.

“It’s still a work in progress, and people still need to get better, but I’ve seen huge improvements,” Bonorden said.