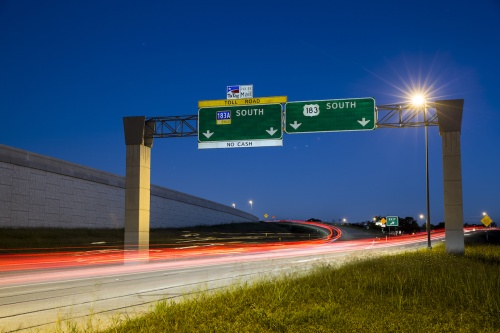 Frontage roads for Toll 183A in Cedar Park have gained support from the Central Texas Regional Mobility Authority.

The Central Texas Regional Mobility Authority board threw its support behind adding frontage roads to Toll 183A in Cedar Park during a meeting in July.

Justin Word, the agency’s director of engineering, said the Mobility Authority is discussing the project with the Texas Department of Transportation as well as the cities of Cedar Park and Leander as to how to complete the project.

He said TxDOT is already working on design of the project, which would include two to three frontage road lanes in both directions between Avery Ranch Boulevard and RM 1431 in Cedar Park. TxDOT would likely build the frontage roads and fund them with some funding assistance from the Capital Area Metropolitan Planning Organization, Word said.

“Construction of these facilities would cover the gap, and then we would transfer maintenance and ownership to TxDOT,” he said. “It would become the new official US 183 and allow Cedar Park to move forward with the redevelopment of Bell Boulevard.”

Cedar Park is currently planning to realign a portion of Bell to make space for a mixed-use center with residential, retail, restaurant and park components.

Previously, Mobility Authority Executive Director Mike Heiligenstein said the agency would not be able to fund adding the frontage road because it was planning the Toll 183A Phase 3 that will extend the toll road to Hwy. 29 in Liberty Hill. That project will break ground in 2020.

Area drivers have long requested the addition of the frontage roads. In 2017, state Rep. Tony Dale, R-Cedar Park, stepped in to spur momentum on the project. He filed a bill in August 2017 that attempted to halt progress on Austin-area toll facilities until the Toll 183A frontage roads were complete. That bill did not gain traction but kept the conversation going about how to fund the project.

“We’ve only got two highways that run through [District 136], and both are toll roads and they’re almost impossible to avoid,” Dale previously told Community Impact Newspaper.

“A lot of folks are just trying to go one exit, but there really aren’t a lot of options but to go through the Park Street toll,” he said.

Van Arsdale also spoke of concerns that the lack of frontage roads could be having an effect on investment and capital coming in to the area.

In the coming months Word said the timeline of when the frontage roads will be built would determine whether the Mobility Authority ultimately pursues any reduced tolling options.