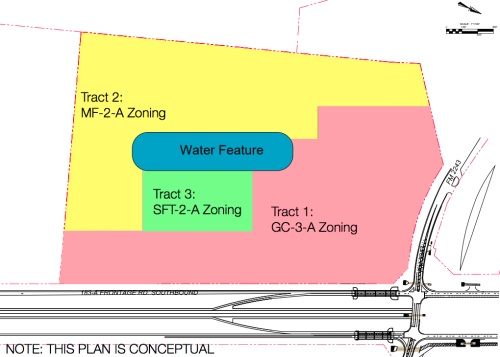 A conceptual site layout and land use plan for Leander Springs shows a central water feature.

The project, called Leander Springs, lies within the city’s transit-oriented development district southwest of RM 2243 and Toll 183A. If approved a second time by Leander City Council, the approximately 77.23-acre property could be zoned general commercial, multi-family and single-family townhouse.

“Leander Springs is intended to be an entertainment-focused mixed-use project centered around a central water feature,” said Michael Neary, senior vice president of Dimension Companies, which is working on the project, during the July 19 council meeting.

The water feature could include swimming, water sports and beaches, according to meeting documents.

The zoning request included a number of waivers, such as allowing up to 60 units per acre; reducing parking requirements for multifamily buildings; permitting outdoor entertainment; increasing the building height for hotel and offices on the property; and receiving complete parkland dedication credit for the water feature, according to the documents.

The previous week, Leander Planning and Zoning Commission did not offer a recommendation for or against Leander Spring's zoning request but rather recommended that City Council review a number of items related to the proposed variances, building heights and site layout.

At the council meeting, 13 members of the community were against the zoning case, citing concerns that plans for the project were too vague and would cause more traffic.

“We’re talking about my home, my investment, my quality of life, which will dramatically change from any type of development that occurs next to us,” Leander resident Robin Stephens said. “I’m willing to work on embracing changes as long as you, Mayor [Troy] Hill and fellow City Council members, will work on gaining us, the homeowners, the most protection that you can.”

Seven people were in favor of the request for Leander Springs, and three others stated they were neither for nor against it.

“This project will bring some fun to our area,” said B.J. Hogan, another meeting speaker. “I’d like to see some businesses come, I’d like to see the revenue.”

Leander City Council approved the first reading of the request 5-1 with a number of conditions, including:

“I’m not super comfortable proceeding with that [request] without seeing some renderings,” Shepherd said.