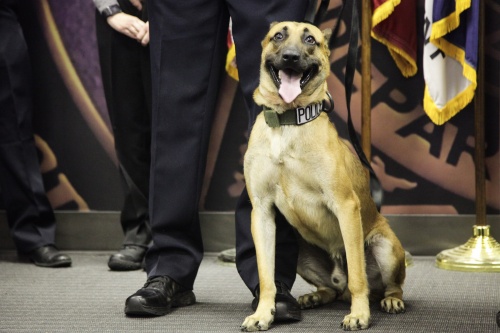 His handler, Officer John Carnley, pinned a police badge on Kodi's collar at the ceremony.

Carnley, who previously served as a U.S. Marine, is a member of the Central Texas Regional SWAT Team, Hayes said. He has served with the Leander Police Department for over 10 years, according to a statement from the city of Leander.

The K-9 duo will be assigned to the city's Traffic Enforcement Management unit, assisting patrol whenever necessary, Hayes said.

The city started an informal K-9 program in the 1990s when officers had to obtain their own dogs, Hayes said. "What we're starting now, [however,] is a full council-supported program," he said.

"To wear this badge is to accept the responsibility and to affirm commitment not only to our department but [also to affirm] a very strong commitment to serve ... the community," Hayes said.
SHARE THIS STORY