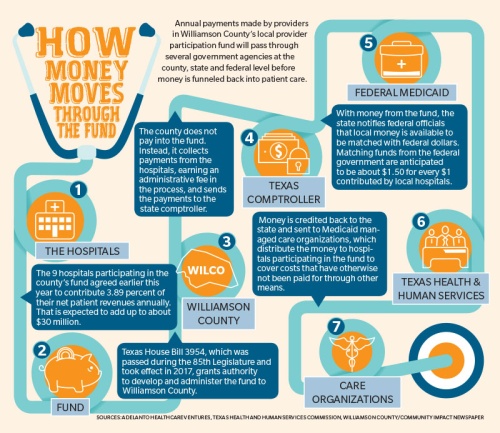 Annual payments made by providers in Williamson Countyu2019s local provider participation fund will pass through several government agencies at the county, state and federal level before money is funneled back into patient care.

Known as a local provider participation fund, the arrangement requires hospitals licensed in Williamson County to make annual payments equal to 3.89 percent of their net patient revenues into a pool of money that will be matched by the federal Centers for Medicare & Medicaid Services.

The fund, which could generate up to $75 million annually for Medicaid patient care, will help Williamson County hospitals mitigate financial losses when providing care to people who are not able to pay their medical bills, said Carlos Zaffirini, CEO of Adelanto Healthcare Ventures, a consultancy that helped develop the county’s fund.

“The entire ‘safety-net’ system for the region is strengthened by these additional investments,” Zaffirini said. “Everybody’s benefiting, because when you’re able to offset your uncompensated care costs, that’s a positive for patients and for the community.”

Hospitals are obligated to provide emergency medical care to anyone regardless of a person’s ability to pay a hospital bill. While there are several avenues to help hospitals pay costs for people without health insurance or people covered by Medicaid, the hospitals usually end up paying some costs themselves, said Don Gilbert, an Adelanto consultant.

“When the state funds Medicaid payments the payment typically covers only about half of the cost of services,” Gilbert said. “The difference between the cost and the payment is not the responsibility of the Medicaid patient; it simply represents a loss to the hospital.”

HOW THE FUND WORKS
The county’s involvement in the process is prescribed by Texas House Bill 3954, which was passed during the 85th Legislature and requires the county to administer local provider funds and initiate money transfers to other agencies in order to receive matching federal dollars. Money collected through payments moves through several agencies before being used to pay for medical care.

After hospitals make their annual payments, the county will transfer the funds to the Texas Comptroller of Public Accounts, which will notify the federal Centers for Medicare & Medicaid Services that funding is available for matching dollars. Zaffirini said the federal match is expected to be about $1.50 for every $1 paid by hospitals.

With matching funds secured, the money is credited to the Texas Health and Human Services Commission, which distributes funding to Medicaid managed care organizations, or MMCOs, in Williamson County such as Amerigroup. The MMCOs can use the money to help cover hospitals’ costs when caring for Medicaid patients.

The county will take an annual administration fee out of the fund equal to 4 percent of the payments contributed or a maximum of $20,000, according to Williamson County Precinct 2 Commissioner Cynthia Long. She said the county is expected to hit this maximum each year.

Payments are expected to generate about $30 million annually for the local fund, a total that should be able to pick up an additional $45 million from a federal match, Gilbert said.

“The county’s involved because a governmental entity is needed to send the intergovernal transfer to the [Texas Health and Human Services],” said Jason Durrett, consultant for Adelanto Healthcare Ventures, at a commissioners court meeting in April. “A private hospital may not send their own funds to the state government to receive matching funds.”

The arrangement of using hospital payments to leverage federal dollars was questioned by several people who spoke to county commissioners during public hearings on the local fund held in April. Bill Kelberlau, a county resident and member of Texans 4 Truth, a politically active citizens group in Williamson County, told commissioners that while the fund does not require additional county property taxes, the federal government’s money still comes from taxpayers.

“There’s a lot of ways of talking about how all of these funds get transferred and moved around,” Kelberlau told commissioners. “[The] bottom line is money goes into this and a bigger chunk of money comes out; the [federal government is] matching it, but that money comes out of our pockets.”

Georgetown resident Rick Lutowski talked about the process at the same meeting, saying inefficiencies and bureaucracy in the federal government were reasons why he was concerned about the fund.

“In general, if you can get away without taking federal money, do it, because in the long run we’re all going to come out ahead,” Lutowski said.

Long said that if the federal funds accessed through the local provider participation funds are not used by Texas and Williamson County, they will be used by other states.

“Until Congress changes the way the program works, I would rather those funds come back to Williamson County rather than more going to other states,” she said.

LOCAL PARTICIPATION
Long said the commissioners made sure there was unanimous agreement from all hospitals involved when going forward with the local provider participation fund.

“Our goal from the hospital perspective was that no hospital was harmed by this process, that it was either neutral or beneficial,” she said.

“[The fund will] help ensure the best health outcomes through the availability of additional resources for preventative and chronic care in Williamson County,” Holland said.

Baylor Scott & White Health—which has several hospitals participating in the fund, including one in Cedar Park—issued a statement in support of the fund as well, saying it will offset uncompensated care by accessing the federal funding for hospitals.

The tax will typically be assessed in October of each year, Long said, and the hospitals will make quarterly installments into the fund.
SHARE THIS STORY