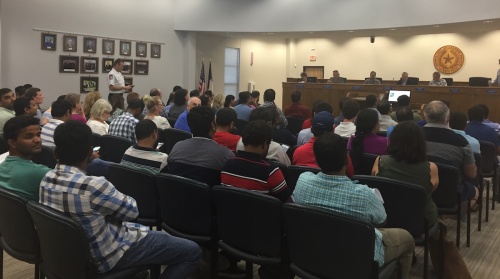 The Leander Planning and Zoning Commission Meeting May 24 was attended by members of the public.

Leander Planning and Zoning Commission’s meeting Thursday night was livelier than most with over 20 speakers, rounds of applause and a standing ovation.

With Pat Bryson Municipal Hall at standing room only, the commissioners listened to a presentation about a proposed planned unit development on around 69.1 acres known as the Simpson Tract. The applicant requested a rezoning from interim single-family rural to single-family townhouse, single-family limited and local commercial on the tract that sits southwest of the intersection of Journey Parkway and CR 175 in Leander.

Ultimately, Peter Verdicchio from SEC Planning—who represented the Simpsons—requested to table the request and after the meeting told Community Impact Newspaper that he planned to withdraw it before the following Leander City Council meeting.

Some of the land in the Simpson Tract is currently undergoing the voluntary annexation process, according to city documents. Under the city’s code of ordinances, all annexed land is given the interim single-family rural land use component pending permanent zoning.

Leander Planning Manager Robin Griffin said with the proposed zoning, the townhome lots in the project would be a minimum width of 35 feet while the houses in the single-family limited area would have a 45-foot minimum lot width.

Verdicchio said he sought to make sure the plans for the development met the needs of the city’s comprehensive plan. Leander’s future land use map indicates that the property is designated for neighborhood residential, a mixed-use corridor and neighborhood center, according to meeting documents.

“We really struggled with how we work within the guidelines on 69 acres with three land use designations,” Verdicchio said.

He said his team met with people who live near the proposed development earlier in the week. He said he understood that neighbors wanted the property developed similar to nearby subdivision Pecan Creek but that he found such development would not be in compliance with the comprehensive plan.

Pecan Creek and the Trails of Shady Oak, the subdivisions to the east and west of the Simpson Tract, respectively, are comprised of single-family urban, single-family compact and single-family suburban zoning, according to city documents. Larger-lot single-family homes are located to the north and south of the property, Griffin said.

During the public hearing on the request, 23 people spoke against the request, naming concerns such as an increase in traffic and crime. Several said they moved to Leander to get away from high-density development and be in a more peaceful rural area, and others said they did not want a neighborhood center with commercial property near their homes.

“I am not opposed to growth, I am opposed to the high-density proposal that was presented here,” said Pecan Creek resident Melvin Mathews.

Some were worried about the crowding the development could cause in the local schools, and the possible effect of increased traffic on the safety of their children who walk to the nearby schools.

“The reason why we selected this community was because of the way it is built; it has open spaces and place for kids to play,” said Pecan Creek resident Heevak Surti. “Having very small tiny homes… it will probably create a lot of imbalance.”

In their subsequent discussion, the commissioners indicated their intention to vote against the zoning case—earning Commissioner Laura Lantrip a standing ovation from attendees.

“Having seen so many people from all sides of this, I don’t really have any questions,” she said. “I am not going to vote to change the zoning.”

The commission raised similar concerns about traffic and the density of the development, but some added that they thought higher density developments should not have such a negative connotation, such as an association with crime, and the local commercial zoning would allow for neighborhood services such as retail, restaurants or daycares, rather than the gas stations that some speakers mentioned.

Before the item was taken to a vote, the applicant requested to table the rezoning. The commissioners unanimously voted to recommend tabling the item, with Commissioner Angela Means absent.