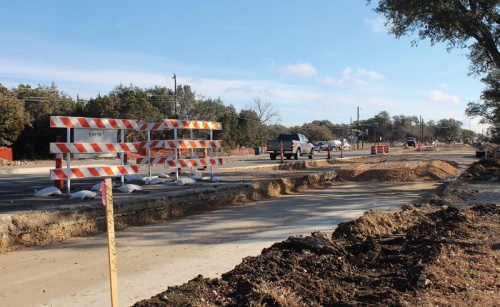 Cedar Park is currently working on an extension of New Hope Drive from Cottonwood Creek Trail to Ronald Reagan Boulevard. An additional extension from Reagan to CR 175 was selected to receive area funding recently.

Around $400 million in state and federal funding will be channeled into transportation projects in Central Texas over the next four years.

Some of the projects selected for the Capital Area Metropolitan Planning Organization’s 2019-22 Transportation Improvement Program include the extension of New Hope Drive in Cedar Park and new sidewalks on S. West Drive in Leander.

CAMPO is the region’s transportation planning agency and is responsible for distributing funding to regional projects, including for improving and building roads, adding pedestrian and bicycle connections, improving transit, and improving safety and operations of roadways.

“[The TIP] does allow federal funds to be applied to a project,” Leander Assistant City Engineer Terri Crauford said. “The four-year plan for CAMPO [determines] what is going to get built [in terms of] major projects that are regionally significant and involve federal funds.”

SELECTION PROCESS
From December through mid-January, jurisdictions in CAMPO’s region as well as agencies such as the Texas Department of Transportation submitted transportation projects to be considered for the 2019-22 TIP, according to CAMPO documents.

The selected projects can receive funding from state and federal dollars, including from voter-approved propositions 1 and 7. The plan identified transportation projects that will begin construction work in 2019-22.

Jurisdictions and agencies had the opportunity to submit projects in six categories: roadways; operations and intelligent transportation systems, such as dynamic message signs; transit; active transportation, such as walking and biking; transportation demand management; and other for nontraditional projects. Projects were scored in their individual categories.

CAMPO staff received a total of 140 project requests for funding, amounting to about $1.5 billion in funding needs, said Ryan Collins, CAMPO short-range planning manager, at the Feb. 12 policy board meeting.
The largest requests were for $126.5 million and $106.1 million from Williamson County for new roadways in the eastern part of the county, but the average request was for about $8 million, Collins said.

CAMPO staffers sifted through projects, rating each one on performance, such as a project’s impact on congestion and mobility, its regional impact and safety measures; a cost-benefit analysis; and project readiness, meaning how far along it is in the development process. Projects received an overall score, and the highest-ranking projects were recommended for funding, according to CAMPO documents.

After scoring the projects, CAMPO staffers presented the final list to residents at a series of open house events as well as posted the list online.

CAMPO’s policy board voted to adopt the new 2019-22 TIP at a meeting May 7, setting the stage for a variety of new projects over the next four years.

LOCAL PROJECTS
While approximately 60 Central Texas projects were selected for the final 2019-22 TIP, several of the listed projects take place within Leander and Cedar Park. The city of Cedar Park—whose mayor, Matt Powell, holds a seat on the CAMPO policy board—submitted two projects that were included, and Leander submitted one that was approved in the final plan.

The planning organization’s policy board is made up of 20 members, including 18 elected officials and representatives from Capital Metro and TxDOT, according to CAMPO's website. The city of Leander does not have a seat because its population was less than 50,000 during the last Census, Crauford said.

She said she currently serves as the smaller cities representative for Williamson County. And, as a part of CAMPO’s Technical Advisory Committee, she also evaluated the results of the call for project requests, she said.

“The city has its own projects that are internal to the city and aren’t necessarily part of the TIP because they don’t hit that threshold,” she said.

One of Cedar Park’s projects is the widening and extension of New Hope Drive from Ronald Reagan Boulevard to CR 175 with an approximately $12.4 million funding request. Jurisdictions receiving funding will still have to put up a local match for their projects in the program, and in the case of the New Hope Drive project, the total cost is about $20.8 million, according to CAMPO documents.

"I'm glad to see they are extending the road," said Leander resident George Schock on Nextdoor. "Hopefully, it will take some pressure off of the other roads and help dilute some of the traffic our growing area experiences."

"I think there are plenty of ways to get between those two roads already," she posted on Nextdoor. "I don't see the point of adding another road; [it] seems like a waste of money to me."

CAMPO's TIP also includes funding for the construction of a 3-mile path along Brushy Creek's North Fork, starting southeast of the intersection of Parmer Lane and Whitestone Boulevard.

“It’s going to be very, very helpful for Cedar Park taxpayers to get the federal funding,” said Heather Jefts, a Cedar Park City Council member. “It will take a lot of the pressure off the city resources, having the state and federal grants assist.”

Jefts spoke at an April 9 CAMPO meeting to advocate for a submission for the TIP by the Capital Area Council of Governments, a funding request for the Commute Solutions program that was ultimately included in the plan. The program looks to reduce the number of single-occupancy vehicles on the road through telecommuting, coworking spaces and ridesharing programs in Central Texas, according to Jefts and CAPCOG’s website.

The city of Leander will be getting funding for the the construction of a 0.23-mile sidewalk on S. West Drive. The sidewalk was among the active transportation project rankings, along with other trails in Central Texas.
Williamson County is slated to receive $8.9 million in funding for a $158.3 million project constructing a new roadway along RM 2243 from Toll 183A in Leander to I-35 in Georgetown.

“Utilizing that work, Williamson County, working with the cities, will take the design to the level of detail necessary to gain environmental clearance for what is planned to be a controlled-access roadway—i.e. no traffic signals—in the future,” Long said.

The city of Austin requested upgrades on Lakeline Boulevard in Williamson County, between Lyndhurst Boulevard and Parmer Lane. The city will now receive funding from the TIP for adding two travel lanes and improving sidewalks and bicycle facilities.

TXDOT SUBMISSIONS
Two nearby TxDOT projects that made the cut were centered on Parmer Lane. The agency plans to upgrade it to a six-lane divided road from Whitestone Boulevard to SH 45 N. TxDOT also will get funding help for the deployment of the Intelligent Transportation Systems Program along the roadway from SH 45 N to US 290.
One concern among members of the public was how expanding RM 620 from the Mansfield Dam to US 183 was not included in the latest project call for funding for the 2019-22 TIP. The lack of funding improvements to the portion of RM 620 in Northwest Austin, Steiner Ranch and Cedar Park prompted 225 of the 239 comments submitted during the public comment period for the plan.

The 2019-22 plan did include funding the expansion of two sections of RM 620 from Hwy. 71 to Oak Grove Boulevard through the cities of Bee Cave and Lakeway. Prior to approval of the plan by CAMPO’s board May 7, Bruce Byron, a project manager with TxDOT's Austin district, addressed what TxDOT is doing on the northern section.

“Our next challenge is with the north section,” he said. “For those of you who justified your concerns about that, we have not forgotten you, and we have been working constantly on finding a project to get prepared for that area. We could not just get that prepared in time and in the time schedule for this particular funding period.”

All of the projects included in CAMPO’s 2019-22 TIP total approximately $442.7 million, over the around $400 million allocated in funding.

“It’s a common practice to ‘overprogram’ in case a project isn’t ready in time, a project costs less than expected, or some other situation that would result in not using the full $400 million,” CAMPO Community Outreach Manager Doise Miers said. “This is done so CAMPO has other projects at the ready and we don’t lose any potential ‘extra’ money to another [metropolitan planning organization] region in the state.”

TRANSPORTATION CREDITS
In addition to the TIP, the CAMPO board approved nearly $13 million in transportation development credits, or TDCs, which are a federal flexible funding tool. Credits are created as a region spends funds from toll revenue on other transportation projects, according to CAMPO.

Last summer, the agency updated its policy on using the credits for regionally significant projects as well as those in disadvantaged communities that have a higher percentage of minorities.

Projects approved in this round of credit requests were all included in the 2019-22 TIP. The credits will serve as a jurisdiction’s local funding match for the federally funded projects in the TIP. However, the jurisdiction must then spend funds initially intended for the project on another similar project, according to CAMPO.
Projects receiving TDCs for the local match include New Hope Drive and Brushy Creek in Cedar Park, Williams Drive in Georgetown, Pearce Lane in Travis County, RM 2243 in Williamson County and a new bus plaza in East Austin for the Capital Area Rural Transportation System.