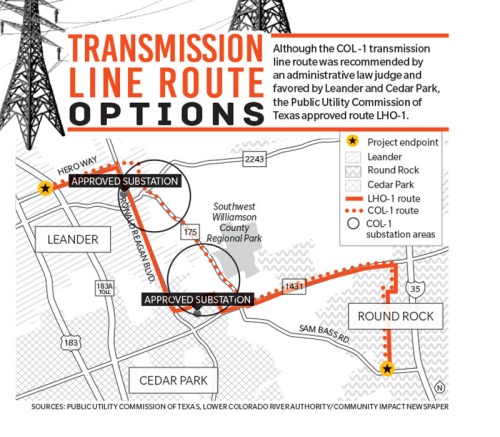 The city of Cedar Park filed a joint lawsuit with landowner group Burleson Ranch against the Public Utility Commission of Texas in October, challenging the commission’s decision for a transmission line to run down Hero Way and Ronald Reagan Boulevard to RM 1431.

The decision for route LHO-1 differed from the recommendation of two administrative law judges who recommended COL-1, the route supported by the cities of Cedar Park, Leander, Round Rock and Georgetown, according to the original petition filed against the utility commission. COL-1 ran along Hero Way and CR 175 before meeting RM 1431, according to utility commission and LCRA documents.

After the route selection, the cities of Leander and Cedar Park—and Burleson Ranch, a group of landowners with property along Ronald Reagan Boulevard—submitted motions for rehearing to the Texas utility commission, according to commission and Williamson Central Appraisal District documents. The motions for rehearing were denied July 28, but Cedar Park and Burleson Ranch filed again in August.

The next method of appeal was to take the issue to district court, Hadley said previously. On Oct. 23, the joint lawsuit was filed with the District Court of Travis County, 353rd Judicial District, according to district clerk documents. The filing stated the plaintiffs—Burleson Ranch and the city of Cedar Park—are “seeking judicial review of the final order” of the Public Utility Commission of Texas.

According to the original petition, the commission “selected LHO-1 after accepting unsworn, extra-record ‘testimony’ from citizens (including a significant number of non-parties, as well as parties not directly affected by the routes in question) at an ‘open meeting’ of the Commission where attorneys were not allowed to speak.”

The documents state that “all administrative remedies have been exhausted.”

The case asks the court to review whether the rights of Burleson Ranch and the city of Cedar Park were “prejudiced because the administrative findings” and decisions that were unlawful or unsupported by substantial evidence.

The case was assigned by the district courts to Judge Gisela Triana on Oct. 31, according to district clerk documents.

On Friday, Hadley said the public utility commission had not yet been served with court documents on the lawsuit.

"The commission stands by its order," he said.

The city of Cedar Park declined to comment for this article, stating that “it is our policy to not comment on pending litigation,” according to city spokesperson Jennie Huerta.

The lawyer representing Burleson Ranch could not be reached for a statement in time for publication.
SHARE THIS STORY