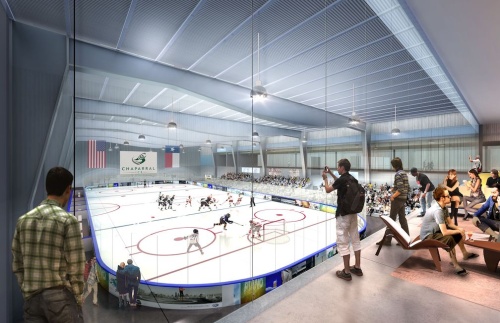 Cedar Park is scheduled to get its first indoor ice rinks next year.

Move over, Round Rock.

The self-proclaimed “Sports Capital of Texas” may have an upstart to the west: Cedar Park.

Three large sports facilities are scheduled to be built in Cedar Park: Max Out Sports opening in spring 2020, iSports Training and Performance Center opening in June 2020 and USTA Texas opening in 2021.

These are no small neighborhood gyms, according to city statistics. The three developments’ total building square footage—337,000—will be nearly twice the size of the H-E-B Center at Cedar Park at 181,640 square feet (not counting office or backstage space). The total acreage is also larger than the H-E-B Center and its lot—35.7 acres to 31 acres.

With its mostly affluent, well-educated demographic, Cedar Park shares similar traits with Austin and other area cities. For representatives of the three planned multisports facilities, however, one factor helped Cedar Park stand out from the crowd: the prevalence of young families in the city.

Josh McKay is the development coordinator for Perardi Development, which is building iSports, a 240,000-square-foot building housed on 14.73 acres. He said Cedar Park’s large, burgeoning young family population is something that Austin and other cities lack.

“Seventy percent of the population in a 10-mile radius is between the ages of 10 and 55,” McKay said, citing data provided by city officials. “You’re getting children and their parents with that demographic.”

Ryan Raya owns Chaparral Ice in North Austin. He plans to open two NHL-sized ice rinks, an indoor soccer field and an outdoor football field at iSports, which will house multiple tenants that feature other sports, sports therapy and retail.

“The demographics in Cedar Park are ideal for team sports,” Raya said. “The area includes a lot of middle- to high-income families with a lot of kids in the 3- to 18-year-old range.”

According to Leander ISD projections, the school district will enroll approximately 41,100 students this fall.

An LISD-sponsored demographer’s report released in October predicted an average growth of 1,000 students per year. The report also estimates that between 2018 and 2028, 50,000 new homes will be built within the boundaries of LISD—with more than half being single-family homes.

Brett Johnson is the executive director of HIT Center Austin, which will rebrand into Max Out Sports once the 77,000-square-foot facility is scheduled to be completed by spring 2020.

For Johnson, the two-generation clientele in Cedar Park was a big draw. He expects his indoor volleyball courts and private gym as well as other sports offerings to appeal to both children on club teams and adults, he said.

“No question that Cedar Park has a lot of young athletes who need places to practice and play,” he said. “And I get a lot of adults. They’re not necessarily elite athletes. They just want to join a gym and be healthy.”

New services
Business owners and representatives said Max Out Sports, iSports and USTA Texas will offer sports facilities currently either unavailable or in short supply in the city.

For hockey, figure skating, public skating, curling and other ice sports enthusiasts in Cedar Park, the closest rinks are at least 12 miles away in North Austin, where Chaparral Ice and the Pond Hockey Club are located.

Starting in 2020, Cedar Park will be home to two rinks when Chaparral Ice opens its second location in iSports.

“Seventy percent of our ice skaters [in Austin]—figure, hockey or public—come from Leander ISD or Round Rock,” Raya said.

Johnson expects most If not all of his planned six to eight volleyball courts in Max Out Sports to immediately be booked by youth club teams.

The USTA Texas facility at Indigo Ridge, which will include more than 40 tennis courts and a stadium court as well as training and rehabilitation facilities, will turn Cedar Park into “a hub for tennis in Texas,” according to USTA Texas executive director Van Barry.

More draws
Businesses and USTA Texas, a nonprofit, pointed to other factors when choosing Cedar Park: the ease of permitting compared to other communities; the relative affordability of land; the existing infrastructure; and a flat, development-friendly topography.

“The city of Cedar Park has taken a lot of due diligence to structure the city for future development,” McKay said. “The city has put a lot of time into their thoroughfare plan. Accessibility drives everything in this world.”

Johnson said he has slowly migrated to Cedar Park. He started in 2008 in the MoPac area of West Austin before moving his business to Cedar Park in 2012.

When choosing a site for Max Out Sports, Johnson said price and location were essential.

“The cost of land was a huge factor,” he said.

Johnson’s business, Max Out Sports, will be just southwest of the intersection of Toll 183A and SH 45 N, and close to an exit.

“It’s a perfect little corner,” Johnson said. “It’s easy to get to Round Rock, Austin and Leander.”

Indigo Ridge—a massive $1.5 billion project that will include the USTA Texas facility—will be located at Whitestone Boulevard and Sam Bass Road, pending a final agreement with the city.

The Indigo Ridge deal was called a “tremendous win for the city” by Ben White, Cedar Park economic development director, during a March 14 meeting.

Barry credited Williamson County’s growth as well as the ease of doing business with Cedar Park and the county.

“Williamson County is one of the fastest growing and attractive communities in the country,” he said in an email. “The city of Cedar Park understood and shared our vision for this project.”

“That other development took two years to get permitted,” he said. “In Cedar Park, we did it in six months.”

Raya credited not just cooperation from the city, but the business community as a whole.

Economic benefit
Raya said he expects iSports to become a tournament hub, drawing youth club teams—and their families—to the facility, local hotels and restaurants. Johnson and Barry said the same about their facilities.

White said in March that the mixed-use development at Indigo Ridge is expected to bring in nearly $139 million in net tax revenue over 20 years.

Max Out Sports and iSports declined to provide investment costs to building their new locations.

According to city documents, the iSports facility complies with the city’s comprehensive plan to establish Cedar Park as “a regional destination for family-oriented activities.”

McKay said he envisions iSports—which plans to include a variety of sports and entertainment tenants—as a “hyper-focused mall around sports and health and fitness.”

“It’s like the old malls where you could drop off your kids and they’ll be in a safe environment,” he said.

USTA Texas has more than 52,000 members. Regional, state and national tournaments may be held there, according to USTA Texas.

Businesses with an outdoor commercial amusement designation such as iSports can only operate between 7 a.m.-10 p.m.

“We plan to be good neighbors,” McKay said.

And long before Cedar Park was home to professional hockey and basketball teams—and USTA facilities in $1.5 billion developments—there was a construction spurt along Toro Grande Boulevard in Northeast Cedar Park in 2003.

Locals started calling the stretch “Sports Row” for its variety of sports-themed businesses.

And Cedar Park has 47 parks totaling 999 acres, according to the city.

There is also a wide array of sports-specific businesses—from gymnastics to swimming to martial arts—dappled throughout the city.

Even volunteers are contributing to Cedar Park’s sports scene.

In 2018, a coalition of city employees and volunteers helped bring about a mountain biking “flow trail”—a downhill trail with sharp turns and small jumps—in Brushy Creek Sports Park, according to Huerta.

Round Rock may still have more sports facilities, but another city is moving up the ranks, sources said.

“From a business standpoint, Cedar Park made the most sense,” he said.