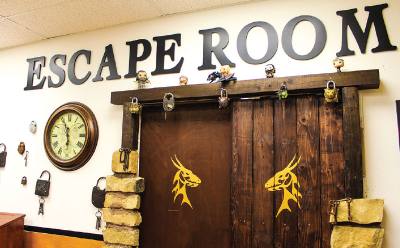 Those searching for intrigue, excitement and adventure may find it without leaving—or while trying to leave—a single room.

David Steele, the owner of Escape Room Leander, said an escape room involves solving clues, codes and puzzles. Traditionally the goal is to escape from a room, but sometimes the purpose is to solve a mystery or find a treasure.

As a “puzzle guy” Steele said he opened Escape Room Leander in November 2015. He designs all the storylines, clues and secrets in the walls himself.

“A man got separated from a wagon train back in the late 1800s,” Steele said. “The wagon train went one direction; he went another direction; and he’s been roaming around Round Rock ever since. The city even named a road after him.”

In the “Throne of Leander” room, players solve clues and puzzles to pull the sword from the stone. When the sword is freed a door slides open, and players walk down a red carpet to the throne.

In the “Flabbergasted” room, players try and solve as many puzzles and clues as they can. While there is a reward, Steele said figuring it out is part of the game.

Some escape rooms list the success rate for a particular room, but Steele said he uses different metrics for success.

“I never keep those stats,” he said. “To me the important measurement is: Did you have fun?”