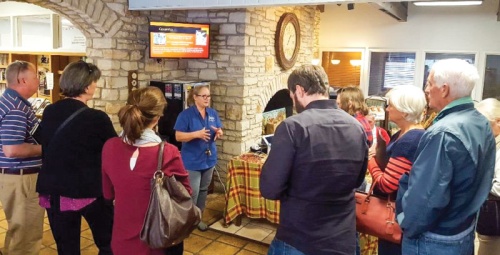 Leanderu2019s design firm for the future senior activity center takes the cityu2019s Active Adult Advisory Committee on a tour of local senior facilities so members can gather ideas for activities.

The plans for what Leander’s future senior activity center could hold are starting to take shape.

Leander City Council received a presentation in April from PGAL, an international firm selected last fall to design the new building. Leander voters approved about $4.2 million in funding for the design and construction of the facility in a May 2016 bond election.

Jeff Bulla, a principal with PGAL, said the firm has been working with Leander’s Active Adult Advisory Committee, whose members provide input in the center’s creation, programs and events.

Bulla said PGAL took the committee to tour local senior facilities around the area, such as some in Austin, Cedar Park and Round Rock. The members also received presentations of current and future senior centers in Allen, Coppell, Carrolton and College Station.

Committee Member Dean Fleharty said viewing other centers allowed the members to formulate ideas of what they would like to see in Leander’s future location. He said the tour made him consider activities that he would not have thought about otherwise, such as a room to shoot pool or do ceramics.

“By visiting four or five different places, we really got a good panoramic view of activities for seniors,” he said.

Bulla said PGAL then had the committee members vote on their priority activities by laying out posters and giving the members five blue dots.

“We asked them to tell us after all their touring and what they know of the senior community here in Leander and the surrounding area, specifically what do they determine to be the most important activities that we need to accommodate in a new facility,” he said.

Some of the most desired interior activities were arts and crafts, cardio exercise, group exercise, special events and movies, and social gatherings. Some desired exterior amenities include walking trails, gardening, outdoor seating and a covered porch.

“The main needs will be met, and I think the public and the seniors will be very happy,” Fleharty said.

The facility is proposed to hold 11,997 square feet, which includes 700 square feet for the Williamson County Children’s Advocacy Center. Bulla said a 1,360-square-foot commercial kitchen will also be used by Meals on Wheels and to serve daily lunches to seniors and to children in the Head Start program.

Fleharty said an 1,800-square-foot multipurpose hall will allow for outside functions at the center, and with so many programs in one spot, he said the new senior center will act as a hub for the community.