CAMPO holds third round of open houses on arterials study 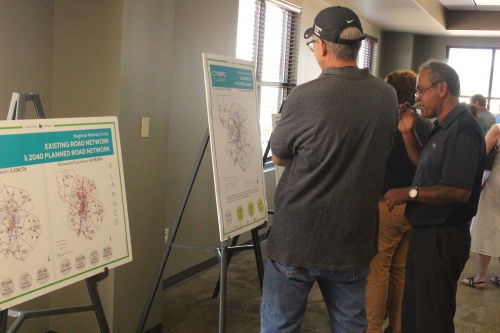 At the June 17 Lakeway City Hall meeting, during presentations from the Texas Department of Transportation and the Capital Area Metropolitan Planning Organization, Mayor Sandy Cox echoed a sentiment she has put forth many times before—traffic and traffic safety are the most important issues in Lakeway.

That sentiment was evidenced by the number of officials in attendance at a June 19 CAMPO open house at Bee Cave City Hall. Cox, along with several other Lakeway City Council members and staff from Bee Cave, stopped by the event to discuss progress made by CAMPO on its Regional Arterials Study.

CAMPO Community Outreach Manager Doise Miers said the information exhibited at the open house represents a collection of ideas pertaining to how better mobility and connectivity can be achieved in the Central Texas region in the next 25 years.

"In western Travis County, connections and mobility are a particular challenge because of the river and the lake crossings," Miers said. "So, that and the geography ... really add to the challenges of making sure the region is well connected and has good mobility."

The plan will build on local planning efforts and take a regional focus on roadways that serve as major corridors and play a vital role in connecting people and places, according to information from CAMPO.

One major example of an arterial in the Lake Travis area is RM 620. Miers said CAMPO has heard from many elected officials and residents that RM 620 and Hwy. 71 are two of the most problematic roadways in the area.

Pertaining to the arterials study, the event in Bee Cave was part of the third and final round of town halls from CAMPO, and Miers said the input received at these events has helped CAMPO staff understand mobility conditions throughout the region. The CAMPO board will consider the study later this summer and into the fall with the goal of having the study accepted, she said, adding potential project sponsors can then apply to CAMPO to have any ideas within the study put into the organization's future plans.

Miers said funding for projects accepted by CAMPO is typically far outshined by the demand, especially since Central Texas constitutes one of the fastest-growing areas in the country. For example, when CAMPO put out a call for projects last year, sponsors applied for a collective $1.5 billion to the organization's available $400 million.

"So there is significantly more need than there is funding available," Miers said.