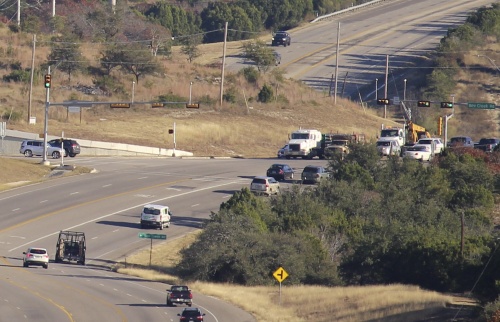 The view from Electric Ave of W. Hwy 71 at Bee Creek Road looking back toward Bee Cave.

Crews are completing the last of utility relocations and continue constructing retaining walls and sidewalks from Redbud Trail to Walsh Tarlton Lane. They are preparing the roadway to begin the expansion for the center turn lane. Crews have completed constructing some of the sidewalks and retaining walls in the project limits, and most aerial utilities have been relocated.

Austin Energy connected service to the new traffic signal at the end of March. After the service was connected. The signal flashed yellow for about seven days to alert drivers to the change before becoming activated full-time.

This intersection in the Four Points area experiences significant congestion. A TxDOT study shows by 2020 travel times will increase by 40-59 percent from RM 620 to Ribelin Ranch Drive. There is a need to add travel capacity to improve mobility. The analysis of proposed improvements indicates the travel times today could be reduced by about 60 percent. This change will help maintain safe access to and from the schools located north of RM 2222 off McNeil Drive.

The project consists of adding an outside northbound merge lane along RM 620 from Steiner Ranch Boulevard to a new bypass road to be constructed about a mile north of Steiner Ranch to RM 2222. Center turn lanes and medians would also be built on RM 2222 between the new bypass road and RM 620.