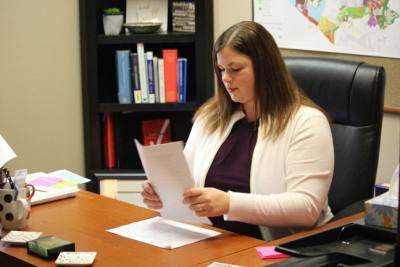 Lakeway Building & Development Director Charlotte Hodges has been on the job less than a year, but she has already implemented or is planning big changes to the city code and beyond. With a degree in business administration and experience in transportation, regional and environmental planning; grant funding; and homeland security, Hodges has a diverse experience pool.

Where did you come from?

Public service is actually in my blood. My father was a city manager for the city that I grew up in for 16 years. It was in the city of Morgan’s Point Resort, Texas, a small city of less than 5,000 people. From the time I was 12 years old I was volunteering at the Halloween carnival. I dressed up as the Easter Bunny over five years in a row. I became familiar with public service and politics and developed a love for small communities. With that background, I started at the age of 16 as an intern with the Central Texas Council of Governments in Belton.

What about your professional background?

I went to college and got my undergrad at University of Mary Hardin-Baylor in Belton and worked there for 10 years. When I graduated with a bachelor’s in business administration, I was promoted to a regional planner. We actually covered a seven-county area. Then I was recruited by the city of Killeen to be the downtown project manager for the revitalization effort. That gave me an opportunity to use some of my transportation-planning background. I got an introduction into marketing and putting on events. That was the first time I had really been in charge of putting on large-scale events for thousands of people. After that, I was promoted to senior planner, and that’s where I really got started in plat review, taking zoning cases and other land-use issues to city council and working on ordinance revisions. I kept working on building my skill set and I started working on my master’s degree through UT Arlington while working as a senior planner. Then I was recruited by the city of Copperas Cove to be their planning director. That was my first introduction to code enforcement and building inspections and permitting.

What brought you to Lakeway?

I finished up my master’s degree, and then I met the love of my life online. He was from this area, and he’s got two kids. The Copperas Cove school district just could not compare with the Lake Travis school district, so he moved me this way. I took a few months off at first and just kind of got used to this area. Then this position opened up, and I was so excited that it was so close and familiar. It’s been wonderful.

What are the top initiatives of your job with Lakeway?

This is a complete transition time for the city. We’ve gone from a small community, and now we’re a growing city in population and in our citizenry–the makeup of them. Our characteristics are changing. And now we’re trying to catch our policies up with that change and what the citizens expect. With this position comes expectations in customer service and efficiencies and processes. To make those you really have to change your code of ordinances to make that happen.

What are some of your top goals?

One of my top goals is to transition code enforcement to code compliance. And that’s a lot more than changing our code of ordinances. It’s ... changing what we actually give to our citizens when we notice a violation. It’s changing that tone in all of our letters and all of our interaction and really changing our processes. Instead of going straight to, ‘I got ya!’ in violations and really trying to enforce those, we’re transitioning to education and compliance.
SHARE THIS STORY

Lake Travis ISD opened a community survey focused on how to best use this federal funding in its COVID recovery.

Rollingwood, alongside a contracted law firm, will send a letter to the Central Texas Regional Mobility Authroity for more information on the MoPac South expansion.