New ballfields are on the way for western Travis County 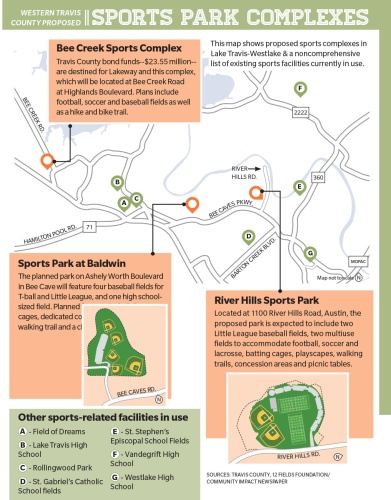 To address a need for more community youth facilities to serve a growing population, three sports park complexes are in the design phase in western Travis County.

To put the need in context, the Lake Travis Youth Association, or LTYA, is a local nonprofit that provides youth sports programs to over 6,000 area students, up from about 4,000 players five years ago, according to its executive director Scott Cronk.

“More than 90 percent of our players attend [Lake Travis] ISD schools, and LTISD has forecast a 76 percent growth rate over the next 10 years, and all these kids will need a place to play sports,” Cronk said.

Travis County Precinct 3 Commissioner Gerald Daugherty said a construction contract is still in negotiations for the county-funded Bee Creek Sports Complex. However, he hoped to present layouts to the city of Lakeway this month.

“We will continue to work with Lakeway and once we get the design layout done, construction should hopefully begin this fall,” Daugherty said. “My goal is to be playing on the fields by spring 2020.”

Lakeway City Council approved an agreement in December with Travis County for the development of the 70-acre site using funds voters approved in the Travis County bond election last November.

Travis County has granted LTYA priority scheduling for field space at the new complex, according to Cronk.

Two other youth sports parks are under review. Both are being developed by the 12 Fields Foundation, which was forged through a partnership between Western Hills Little League, Westlake Pop Warner and Westlake Youth Soccer.

The land just off Bee Caves Road for the Sports Park at Baldwin is owned by Eanes ISD and is leased to Western Hills Little League.

Once development begins, the project is set to take about six to nine months to complete, according to 12 Fields Foundation spokesperson Mike Dealy.

River Hills Sports Park will sit on about 15 acres in Austin’s extraterritorial jurisdiction. It is awaiting final approval from the city of Austin after years of negotiations and a now-settled legal contest with neighbors over the original size of the facility.

“We have no significant changes to report in the past 30 days [as of May 5],” Dealy told Community Impact Newspaper. “We are still in the process of responding to the latest comments on our site development plans from the city of Bee Cave, Travis County and city of Austin respectively.”

The project was submitted for permitting with the city of Austin and Travis County in July.

Once development begins on this third project, 12FF foresees construction will take about six to nine months to complete.