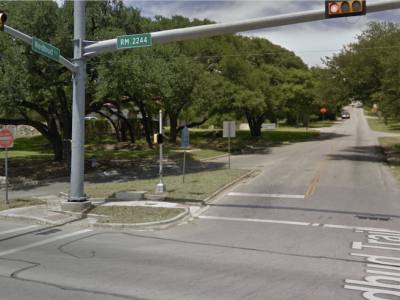 A screen grab shows the intersection of Bee Caves Road and Red Bud Trail in the Westlake area.

WCID 10 customers include the city of West Lake Hills (which constitutes about half of the territory covered by the district) as well as the neighborhoods of Westwood, Rolling Hills West, Knollwood, Westlake Highlands, Sundown Parkway, Camelot and the original Rob Roy Ranch.

2. Phase 1 of a new pump station is underway with completion anticipated in fall 2019.

3. New waterline installation for Old Stonehedge Street is complete with the exception of paving.

4. A portion of Red Bud Trail from Old Stonehedge Street south to Flintridge Road is under construction and has received 3,435 of the approximate 5,839 linear feet of new waterline.

6. Circle Ridge Drive,  the next project to commence, is expected to start construction March 1. The project will consist of 2,575 linear feet of new 8-inch waterline. Contract time allotted for the project is 180 days.

For the 5,000-acre area of western Travis County served by the WCID 10, it is critical to have water delivery system able to suppress house fires and to prevent house fires from becoming wildfires, according to the district.

"Over half of the District’s 80+ miles of distribution pipes are 6-inches in diameter. All of the 6-inch lines were approved by the City of Austin and were the then-standard," according to the district. "The bond improvements program will add 8-inch and 12-inch water lines serving several neighborhoods, and a new 16-inch trunk-transmission line along Bee Cave Road, concurrent with the Texas Department of Transportation’s widening project. These system improvements will approximately double WCID 10 system water flows for the protection of our community."
SHARE THIS STORY