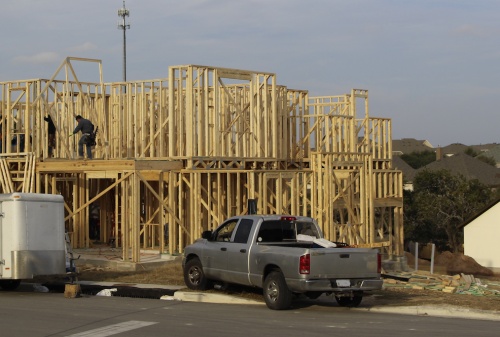 Framers work on a new home in the Sweetwater West community in western Travis County.

What we reported: Median home prices for units sold reached $1.03 million on the 62 homes sold in the first quarter of 2017 in the 78746 ZIP code, which encompasses the cities of Rollingwood and West Lake Hills, as well as the Travis County and city of Austin neighborhoods Davenport Ranch, Lost Creek, Rob Roy and Westwood. Median home sale prices peaked at $1.425 million in February, with 20 homes sold, according to data provided by the Austin Board of Realtors.

Although home prices in the area have been going up for quite some time, Brian Talley owner of Regent Property Group in Westlake said in May that the recent peak is more a reflection of growth for the entire Austin metropolitan area rather than something unique to Lake Travis-Westlake. Talley said he had seen some softening on the higher end of the market over the past two years but did not expect the area trend to reverse any time soon.

"The number of homes sold in the Westlake area went up, as did the average price per square foot," Talley told the Community Impact Newspaper Dec. 20. "I feel like we've leveled off some of the growth we were experiencing two to three years ago, but those are really solid growth numbers."

Talley said the slowdown over the past part of 2017 is an annual part of the market cycle and he does not believe it signals a move toward a slower 2018.

What's next: Talley said he is bullish on the Lake Travis-Westlake area being able to at least maintain the status quo for existing home sales in 2018.

"[The market should remain stable] as long as we avoid a national or global [economic] catastrophe," he said. "Austin is not immune to bigger global issues, but barring that we'll continue that positive momentum in 2018."

Mark Sprague, state director of information capital for Independence Title, said the 2018 Austin-area housing market will be a lot like this year's housing market - slower than two to three years ago, but still experiencing strong activity.

"There are multiple economic factors to watch out for going into next year," he said. "Slowing job growth in Central Texas, the impact of Hurricane Harvey on the price of building materials and housing development costs, and the overhaul of the [nation's] tax plan are all factors that could hinder housing market growth and negatively impact housing affordability in the Austin area in 2018."