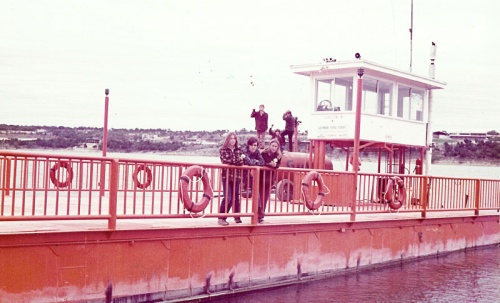 In December during a special Lakeway City Council meeting, Ashby Johnson, executive director of the Capital Area Metropolitan Planning Organization, presented the idea of a possible ferry on Lake Travis.

Though he specified it was just an idea and would require a backer, Ashby brought up the alternative transportation method as a way to bridge the gap between those living in lake communities who would normally take up to two hours driving around the water.

What initially sounded like a novel concept actually existed on Lake Travis in the early 1970s.

Roy Abels has authored several articles for the Point Venture Homeowners Association, including one on the ferry that used to run through Lake Travis almost five decades ago. Abels said he received much of his information from Lawrence Smith, one of four developers of the development company that purchased and ran the ferry, as well as his co-researcher Charlene Robertson.

Abels said public demand for the ferry can in large part be traced back to 1941, when the Mansfield Dam’s gates closed and covered the Lohman’s Crossing bridge.

Bridge access was cut off, and Point Venture developer William C. Canfield, along with many others living in the area, wanted to create an easier route between lake communities. Canfield located a sidelined ferry in Llano County, purchased it, and had it disassembled and shipped to Dink Pearson Park in several 10-foot cubes, Abels said.

In April 1971, Point Venture Development Co. christened the Lohman’s Ford Ferry on the North Shore of Lake Travis, according to Lewis H. Carlson’s book “Lakeway: A Hill Country Community,” which also states it was the only inland ferry boat in Texas at the time.

The 20-minute trip moved residents between Point Venture and the south side of the Hurst Creek Road dock, allowing for accessible travel between the north and south shores, Carlson writes, adding the trip helped drive the Point Venture tourism industry.

“In good weather and wind conditions, the ferry would land at one of the docks every 25 minutes,” former Lohman’s Ford Ferry driver Greg Sorrento said. “If I didn’t have any problem loading the cars, I would be heading to the other side of the lake every 30 minutes.”

Lohman’s Ford Ferry held up to eight vehicles at a time, freeing up traffic on the north side of Lake Travis, and a one-way ticket cost passengers $1, Sorrento said.

The Lohman’s Ford Ferry ended its enterprise in 1973 due to a decrease in water levels and growing financial concerns, according to Abels, who added it was purchased and redesigned as a party boat called the Flagship Texas in 1982. In 2013, the Flagship Texas was destroyed in a fire originating in the boat’s kitchen.
SHARE THIS STORY