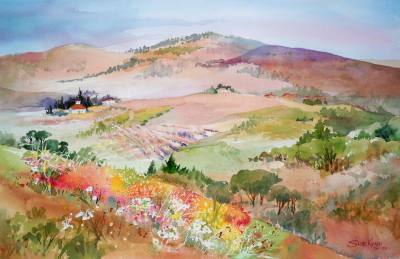 Tuscan Tapestry is a watercolor by Texas artist Sue Kemp.

Three art exhibits are currently on display in Lakeway - all different from each other, all free and none requiring a drive out to the city of Austin.

Educator and artist Sue Kemp began painting in watercolor over 30 years ago. She moved to Austin in 1988 and was a partner in the Littlefield Gallery on Sixth Street in the early 1990s. Kemp’s paintings have been included in gallery collections and many shows. She has been a faculty member of The Contemporary Art School at Laguna Gloria in Austin since 2002 and has taught watercolor for many years. Her watercolors have appeared in eight books, including a children’s picture book. Kemp’s large close-up painting of bluebonnets was chosen for the official 2007 “Wildflower Days” poster for the Lady Bird Johnson Wildflower Center.

Mary Barnes exhibits her vibrant oils of the Texas Hill country, Lake Travis area, Texas coast and scenes from travel at the Wall Street Gallery in Prosperity Bank. Barnes paints with the Bunkhouse artists and has been involved in arts all her life. In South Dakota, she directed dance programs and workshops with the Artists in School Program. She retired in 1990 as an interior designer.

A collection of prison art from a 15-year period is on display at The Lakeway Church Fellowship Hall. Many inmates learn to draw using a pencil while incarcerated, according to a news release from the city of Lakeway, adding that there is very little original art created in prison. Most inmates copy pictures from magazines or sketch portraits using photographs.