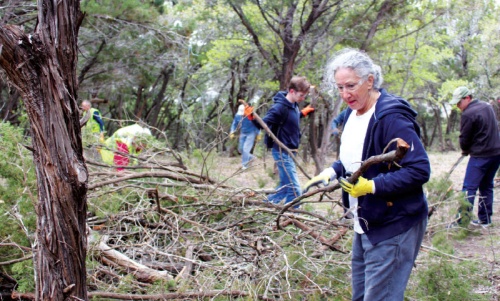 While ongoing efforts to reduce the threat of wildfire  have been successful in reducing the wildland fire threat, there is still an abundant amount of natural fuels available to burn in the Lake Tavis-Westlake area, according to Chief Robert Abbott, Lake Travis Fire Rescue, also known as Travis County Emergency Services District No. 6.

The National Weather Service’s Climate Prediction Center report for April, May and June is calling for hotter and drier-than-normal conditions across much of Texas.

“I see 2018 being a fairly active fire season. I don’t see it panning out to be like [the devastating Central Texas fires in] 2011, but I do see it as an issue, something that we have to monitor,” Abbott said. “It’s our duty and our job to continue to remind people that this is a threat. We have to keep this [topic] at the forefront of everybody’s minds, or they’re going to forget it.”

On Sept. 4, 2011, Steiner Ranch homeowner Norma Harais said she and her family escaped their house as they watched wind-driven cinders cross RM 620 and drift into the neighborhood they had called home since 1994. They were evacuated for three days, only to return and find their house was a total loss along with 23 others.

“We were the first to leave because [the fire] was right in our backyard at that point,” she told Community Impact Newspaper.

Harais’ advice to newcomers to the area is to remain aware of changing weather conditions and to prepare for the worst.

“[Remember to] clean up the fire hazards around [the outside of] your house; clean out your gutters; it’s basic stuff,” she said.

In Spicewood a fire that also sparked on Sept. 4 destroyed 67 homes and burned 6,500 acres. A Texas Forest Service report into the fires found no official cause for either fire. Earlier that year in April, the Pinnacle Fire destroyed 10 Travis County homes after someone left a campfire unattended.

Abbott recalled everything about 2011 was record-setting. The severe drought that parched the landscape and vegetation that summer played a role in the burning of 4 million acres around the state and the loss of 2,947 homes, according to state records.

The year after the Labor Day weekend wild fires, Steiner Ranch became Firewise USA-certified. That meant trained community volunteers put in hours with fire authorities to help establish ways to lessen fire risk. Firewise committees are also tasked with providing homeowners guidance on how to conduct assessments of ignition zones around their properties.

After the 2011 fires, county authorities formed the Joint Wildfire Task Force to increase the region’s wildfire preparedness and encourage the development of so-called fire-adapted communities. The Austin/Travis County Wildfire Protection Plan released in October 2014 builds on that, calling for better coordination among agencies, improved resources and wildland firefighting training. Around Lake Travis-Westlake, much has happened in recent years, pre- and post-2011:

ESD 8: In 2012 it received a Lower Colorado River Authority grant to provide personal protection and wildland firefighting equipment for all staff, gear that was not available during the
2011 fires. In 2014, ESD 8 purchased three new brush trucks, three command vehicles—two new—and a fire boat with money raised through the department’s Auxiliary fundraisers.

All local agencies are part of automatic-aid arrangements to provide help to neighboring districts. And all are dispatched through the Austin Fire Department, ensuring the closest unit to an incident in the county will be sent.

The ongoing wildland fire risk in 2018 is prompting a continued focus on local preventive strategies to minimize an eruption of flames in populated areas such as older, heavily-treed areas of Lakeway and the canyons of West Lake Hills.

“We’re better-prepared for a tougher wildfire season than we were in 2011,” Abbott said. “Part of that is training we have received over time."

ESD 6 also just filled two full-time positions. One is a fire-mitigation specialist for public outreach. That role is responsible for coordinating with the city of Lakeway’s Firewise program to conduct free home ignition zone assessments or, home perimeter audits, for city homeowners.

Also newly hired is a fuel-mitigation team leader—heading up to 10 staff—to coordinate so-called “cut, drag and chip” wood fuel-removal efforts from September through February on preserve land and other wooded areas around the district.

Lakeway is celebrating five years as a Firewise USA-recognized community. Recently, resident Bob Deforest spent a cool, overcast Saturday morning in early April with about 50 other people volunteering to haul cut, small-diameter cedar tree branches and underbrush to a nearby wood chipper provided by LTFR. The event was organized by Lakeway’s Firewise Committee.

“We’ve seen what happened [this year] in California and other parts of the country. It’s great to do something preventative out here,” Deforest said.

Yet the risk remains, given how heavily treed much of the district is, according to Lakeway City Forester Carrie Burns. She showed Community Impact Newspaper a map of Lakeway, which is home to 13,600 residents, that features a highly visual rating index of the destructive potential of wildfire on people and their homes (see map at left).

“What I want people to see, if they look and see their homes are in the high-priority area, we want them to come to us and say, ‘What can we do?’” Burns said. “We want to target them as the highest-priority people to talk to.”

Burns called the 30 feet around a home the defensible space from a wildfire. She encouraged residents to clear that perimeter of overgrown brush and debris that can be ignited by floating embers that can travel up to a mile and create spot fires. (for more information see sidebar below).

In ESD 6 major challenges include the rapidly growing population.

“[That includes] development of large million-dollar homes with magnificent views of the lake or Hill Country—but which don’t have easy access for first responder vehicles,” Abbott said, adding he would also like to see more entrances and exits in new and existing subdivisions.

West Lake Hills Fire Department has also promoted dead wood pickup programs. As with other communities, those efforts are part of maintaining the city’s annual Firewise USA accreditation. To continue to be designated as a Firewise community, there are public participation records that must be submitted each year, including total hours of prevention activities, which are credited by event times and the number of people participating.

“Probably the most difficult item on our wish list to complete would be for our residents to maintain their property in accordance with the Firewise program,” ESD 9 Chief Mike Elliott said.

ESD 9 will hold an open house May 19. Part of that event will include Firewise information, Elliott said. Usually when the fire weather is high, any part of Travis County could be ravaged by wildfire and stretch resources. ESDs cannot afford to have extra staffing all the time, Elliott said.

“We usually ask some of our personnel to come back for extra staffing on red flag weather days,” he said.