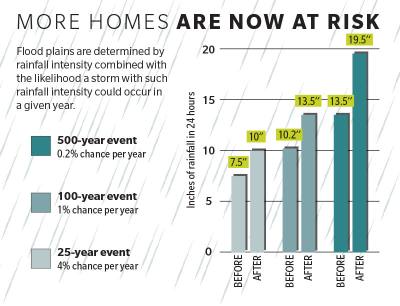 Central Texas is already one of the most flash-flood-prone regions in North America, according to Austin’s emergency management office. However, a new federal study shows more intense rainfall has exacerbated that threat in the capital city, nearly doubling the amount of structures in danger of flooding from 4,000 to 7,200.

Such changes are acutely felt in Central Austin. According to a Community Impact Newspaper analysis of the new proposed flood maps, approximately 694 properties previously thought to be out of harm’s way are now in the flood zone. Officials say the properties will likely be subject to flood insurance requirements, tighter development rules and property value reductions.

“Our understanding of flood risk has changed significantly,” said Kevin Shunk, flood plain administrator with Austin’s Watershed Protection Department. “There are more people and buildings at risk of flooding than we previously thought.”

The study—called Atlas-14—was conducted by the National Oceanic and Atmospheric Administration and is the first of its kind since 1961. Shunk said the result is the most significant change to the city’s flood-mitigation efforts since flood maps were first introduced in 1983.

“Any flood-[mitigation] infrastructure in the entire city is now undersized,” Shunk said. “Every bit of it.”

Although Austin is no stranger to deadly floods, officials, environmentalists and developers agree the changes to follow Atlas-14 will be costly, especially as the city grapples with its ongoing affordability crisis and rapid population growth. However, experts say defense against the forces of Mother Nature should be looked at as a long-term affordability strategy, as doing nothing will come at a much higher cost in the future.

Lower risk in the west

The city of West Lake Hills’ timeline for a potential $15 million to $20 million November bond election was recently pushed back due to flood plain map changes.

Some of the proposed projects on the bond are now in the flood plain, which added complications for architects the city hired to work on plans for new facilities that would be funded by the bonds.

The city must make sure it has engineered the changes into the cost estimates for the projects, Mayor Linda Anthony said.

“Luckily, we’re not dealing with this after the fact and know about it going in,” she said.

The new floodplain maps do not severely affect Rollingwood since the city is almost completely built out, according to City Administrator Amber Lewis.

“Of course there are regulations for building in the flood plain,” Lewis said. “But regarding any problems [with the updated data] encountered so far, developers of one upcoming commercial project are already well aware of Atlas-14 and plan to elevate the building so it’s out of the new flood plain—so that hasn’t been an issue.”

Flooding and drainage in general is always a top concern, and officials plan to continue moving forward with a new infrastructure improvements plan, Lewis said. She added Atlas-14 will play into that plan, which was still in an early stage when the data came out.

“There were no setbacks with the plan,” she said. “We knew it was coming up and were prepared to incorporate it into city drainage projects.”

“We do use the new precipitation totals in planning or review efforts and follow Atlas-14 topics closely,” he said. “However, the council has not taken formal action to adopt a regulatory use of the Atlas-14 rainfall totals and their effect on flood plains.”

Bee Cave deals with a single low-water crossing, which, while still technically in Travis County, city citizens live on both sides, Garza said.

The city is amid negotiations with the county to annex the low-water crossing. Many residents opposed a large bridge proposed by Precinct 3 Commissioner Gerald Daugherty and pleaded with officials to take over the land and subsequently gain control over infrastructure decisions pertaining to the low-water crossing.

Daugherty previously said he does not want to build anything residents do not want, but a major reason the bridge was such a focus is because there is only one entrance and exit to the adjacent neighborhood called the Homestead, and the low-water crossing is prone to floods.

“I think that if the bridge is going to get built, it will be for the 500-year flood because what we are basically setting up is the Atlas-14 flood plain map that will be coming our way pretty soon,” Daugherty said at the beginning of the year, adding a bridge constructed to stand up to a 500-year flood is likely what county engineers would want to impose.

Lakeway City Council has also not taken any sort of official action on the matter, City Manager Steve Jones said.

“We’re going to watch and see what the county does,” he said. “Declaring a house to be in a flood plain can have a severe impact on property values—we want to be careful and make sure whatever action we take is based on what [the Federal Emergency Management Agency] says and science.”

Shunk said since the rainfall data was finalized last fall, his department has been scrambling to educate property owners on their new flood risk and tighter development restrictions coming down the pipeline.

Atlas-14 shows a roughly 33% increase in the amount of rain that could fall in a 24-hour period. As a result, the properties experiencing greater flood risk are those in close proximity to the city’s creeks, such as Shoal, Waller, and East and West Bouldin, since more intense rain means a wider spread of creek overflow. The area over which a creek’s floodwaters can reach is called a flood plain.

Cities like Austin design flood infrastructure and regulate land use based on 100-year storm levels. Now that the 100-year storm has jumped in intensity and the flood plain has expanded, the watershed protection department has proposed tighter development restrictions, highlighted by a permanent moratorium on adding dwelling units in the flood plain and a requirement that the ground floor on any redevelopment or new construction needs to be lifted 2 feet above the flood plain.

The ordinance changes were initially scheduled for a City Council vote this spring; however, watershed protection officials wanted further public input before submitting the proposal. A vote is now expected for October.

David Maidment, professor of environmental and water resource engineering at The University of Texas, said the new efforts at mitigating flood risk are the city’s way of ensuring no repeats of the destruction of residences along Onion Creek in the 2013 and 2015 floods and the $100 million in tax money subsequently spent on buying people out of those properties.

“We’ve got to plan more appropriately in the future than what was done in the past,” Maidment said. “It’s clearly a shock to people who are now going to be in a flood zone that weren’t before, but it’s just a recognition of the risk that exists.”

Local environmental experts say the findings of Atlas-14 only further the evidence of a shifting climate.

“We have to acknowledge that we’ve entered a new normal with extreme weather events,” said Jo Karr Tedder, founder of the nonprofit Central Texas Water Coalition, which advocates for use of scientific data in water management. “We must use current data and science to better prepare for the future.”

Maidment said city planning has to take the shifting climate into consideration, and acknowledging Atlas-14’s increased flood levels across the community is a “step in the right direction.”

“If we build in flood plains, if we put more pavement over land that flows into our streams, we’re going to increase flooding and make the problem worse,” Zabcik said. “If we redefine our flood plains according to Atlas-14, we can pull back from streams and channels and reduce the runoff flowing into them.”

In Austin City Council Member Leslie Pool’s District 7, which stretches from Central to North Austin, many properties will enter the flood plain for the first time as a result of Atlas-14. Pool said her constituents have been talking about the potential flood plain changes for the last two years.

Pool said the 1981 Memorial Day flood that killed 13 people was a wake-up call for Austin and resulted in several property buyouts along Shoal Creek in what is now her district. She said something similar could happen again without proper preparation, especially as the region experiences more intense rainfall.

“My bottom line is I want folks to be safe and keep themselves out of dangerous situations,” Pool said. “We need to increase our resiliency and ensure our housing situation is more sustainable.”
SHARE THIS STORY

The El Dorado Gallery will feature paintings, sculptures and decor by international artists.

The city of Lakeway and Bee Cave Chamber of Commerce are putting on two holiday events in Lake Travis-Westlake on Dec. 4.

Families can head to West Lake Hills this weekend to enjoy Westlake Wonderfest for free.