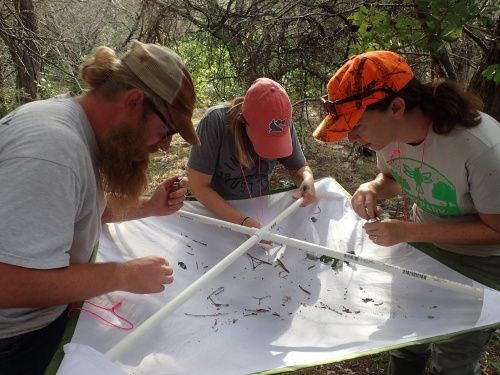 The spread of tawny crazy ants, sometimes called raspberry crazy ants, is as intriguing as the invasive insect’s name.

Researchers from the Balcones Canyonlands Preserve and the Brackenridge Field Laboratory, University of Texas partnered to study the impact the ants have on Travis County and how any negative effects might be curtailed.

Tawny crazy ants are native to Central and South America and have been spreading throughout the Gulf Coast region since they were introduced into Houston in 2000, said Edward LeBrun, a research scientist at the Brackenridge Field Laboratory.

The first population in the Austin metro was found near Briarcliff in the Lake Travis area in 2011, LeBrun said. More colonies have popped up around the county since, though not necessarily from the original group.

“They can come from anywhere,” LeBrun said. “The way they spread is when people who live in infested areas have something outside they move, like a potted plant. Unfortunately, RVs are also a common way of moving them around.”

Most of Travis County is not infested yet, though, LeBrun said.

“When you’re in an infested area, you know it,” he added.

Tawny crazy ants are part of a subfamily of ants that spray acid as their defense and attack mechanism. They are aggressive, but small, so their bite does not hurt, LeBrun said.

“What happens is, you put your hand on a tree or step in the grass and they will swarm up your arm or leg, bite you and spray acid in the bite,” he said. “It’s annoying but doesn’t really hurt.”

Unlike fire ants, tawny crazy ants will come into the home, and controlling them requires pesticides that have to be reapplied more than is legally allowed, LeBrun said. The ants also nest in electrical boxes and destroy the wiring, becoming an economic burden as well.

While the ants are a nuisance for humans, they can be harmful to the ecosystems they invade.

Travis County Wildlife Biologist Travis Clark is looking at what effects the ants have on prey-based arthropods, a food source for golden cheeked warblers, an endangered Texas bird.

LeBrun said his team did a study in Houston that compared habitats invaded by ants with those just outside the infested area.

“There was a really dramatic reduction in arthropod abundance and invertebrates,” he said. “They are the base of the food web and important for determining how plant populations operate.”

He said forests where the ants have invaded are quiet. There is little insect and bird song because so much biomass has been channeled into making ants. The ants are “super colonial,” meaning all of the nests within a population are members of the same colony and share resources.

The researchers at the Brackenridge Field Laboratory believe a microsporidia pathogen could be the first step in inoculating populations. Microsporidia are fungi, or organisms that live in the cells of other organisms. The virus-like phenomenon could control the ants without harming other creatures. The strain the researchers are working with has been found in populations in Florida and other parts of Texas, LeBrun said. Experts are not sure if it came from South America or was acquired by ants in the U.S., but because it’s already here, it decreases risk calculations as a control agent.