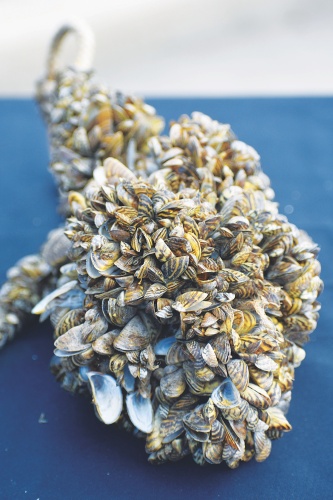 These zebra mussels are hanging on a simple rope.

When Ron Criswell first put his boat in the waters of Lake Travis 11 years ago, zebra mussels were the last thing on his mind. In mid-June, the longtime member at the Hudson Bend marina was talking regularly about the “destructive nuisance” with many of his marina slip neighbors.

“This year they’re gaining enough of a foothold to be problematic,” Criswell said, indicating a big concern is the tiny mussel offspring making their way into raw water intakes and larger watercrafts. At area marinas this summer, it is easy to spot the tiny mussels clinging to dock slips just below the waterline. The sharp-shelled critters are also visible along stretches of lake shoreline.

“Getting rid of the [mussels] is not going to happen. They’re in thousands of lakes,” Criswell said. His immediate solution is to add the same chlorine tablets used in swimming pools to keep his boat’s inner workings clear.

According to the Texas Parks and Wildlife Department, zebra mussels are an invasive species that spread from one freshwater lake to another, frequently by traveling on boats and trailers. The mussels were discovered in Texas within the past decade and found in Lake Travis in 2017, according to the state department.

The species has a distinctive zebra-striped shell, and each can grow to about 1.5 inches wide. According to Texas Invasives, an online project maintained by the Lady Bird Johnson Wildflower Center, one zebra mussel can produce up to 1 million microscopic larvae, which can survive for days in water trapped in a boat. The species can pose an ecological threat, damage boats, leave sharp shells along shorelines and threaten a city’s water supply by clogging pipes.

It is required by Texas law to drain water from a boat before leaving the water, said Marcos De Jesus, a district biologist for the inland fisharies department for the TPWD. He said the department has been working to teach the public to clean boats with high-pressure water and soap and let it dry for at least a week before moving to another lake that is not infested.

“It’s really hard, because you’re dealing with something you can’t see,” he said. “It’s microscopic in the form that it transfers.”

The mussels are able to cluster together by threads extending from underneath their shells, allowing them to attach to objects, surfaces or other mussels, according to Nonindigenous Acquatic Species by the U.S. Geological Survey. The species can filter the lake water, which has an environmental impact by hurting native aquatic life.

“If that food chain gets depleted because of the zebra mussels, other critters that rely on that food chain, like algae and small fish, will start getting impacted,” De Jesus said.

He said zebra mussels can be detrimental to a city’s water supply by colonizing the insides of water pipes and restricting the flow of water.

“I think that’s what the cities are worried about—having to maintain these intakes and preventing them from getting clogged from zebra mussels,” De Jesus said.

Mehrdad Morabbi, Austin Water’s Water Treatment Operations Manager, said the entity is in the first stage of hiring a consultant to explore long-term solutions to the zebra mussel incursion in several lakes.

“We have been tracking them, so when we were designing Handcox Water Treatment Plant [located on RM 620 south of Bullick Hollow Road], we actually planned for this and put in chemical injection points in the vertical section of the pipe before it goes underground [toward the lake],” Morabbi said.

Depending on the consultant’s recommendations, a liquid formula safe for humans but also designed to eradicate the mussels’ spread would be added in the future.

Austin City Council approved a five-year contract in June to service a half-dozen water facilities around the city for $212,000 a year, including the River Place Water Treatment Plant on Big View Drive and the Emma Long Water Treatment Plant on City Park Road. The portion to inspect and clean the deep intakes in Lake Travis is $84,000 annually, city records showed.

Philip Wolfe, owner of Chapman Marine in Hudson Bend, said he receives about two emails or calls a week from boat or marina owners looking for help removing infestations of the mussels.

Wolfe said he first noticed a zebra mussel near Mansfield Dam around last October. He said a small part of his commercial diving, construction, and salvage business is now dedicated to mussel removal.

At Water Control Improvement District 17, which serves Steiner Ranch, Flintrock, Comanche Trail, Serene Hills, Apache Shores and River Ridge, a first step to address the issue has been to review the potential clogging of the district’s water intake.

Jason Homan, general manager of WCID 17, said the district recommended moving forward with a method to safeguard the intakes while waiting on further research for plant treatments. Beginning last summer, WCID 17 started monitoring its intake piping twice a year. As of its last inspection in April, no mussels were detected on any WCID equipment, Homan said.

After mussels were seen in a pumping station at the West Travis County Public Utility District, Robert Pugh, the agency's general manager, said design work is underway to add sodium permanganate—a common chemical used for water treatment—in the raw water intake structures to prevent the attachment and growth of mussels.

De Jesus said the TPWD has noticed that lakes in Texas typically experience the worst of a zebra mussel infestation in the second and third summer after the mussels were discovered. He said this summer could be the height of the infestation in Lake Travis.

“So right now, we’re experiencing the year after boom,” he said.

Though with no way to rid the lakes of the species, he said treating pipes for the mussels will become a regular cost of pulling water from the lake.

“Eventually, those costs get passed down to the users, the consumers,” De Jesus said. “That’s where it really could get bad, when water bills start going up because there’s more money put into treating these intakes at the lakes.”

“At this point there is no silver bullet to eradicate zebra mussels in a body of the water the size of Lake Travis," said Clara Tuma, LCRA’s public information officer. "Zebra mussels will be a fact of life in the lake, at least for the immediate future.”

LCRA staff have been cleaning, draining and drying their agency's boats and equipment when moving from one lake to another and are encouraging boaters to do the same.

The Village of Briarcliff may consider adding chemicals to the community’s water intake pump system, according to Aaron Johnson, the village’s administrator. Like other lakeside entities,  its leaders are now keeping an eye on the mussels’ spread.

In the meantime, De Jesus said all residents should be conscious and spread the word on how to prevent the spread of zebra mussels, and not to let the mussels prevent them from utilizing the area’s natural resources.

“We hate to see people not enjoying the lakes and not using the resources because of [the mussels]; it’s just a matter of doing the right thing after you use them,” he said.
SHARE THIS STORY