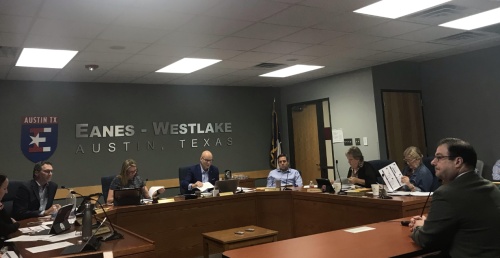 The Eanes ISD board of trustees addressed the implications of House Bill 3 during an Aug. 27 meeting.

Superintendent Dr. Tom Leonard led the discussion on the financial implications of House Bill 3 during an Aug. 27 meeting. According to him, many people have been trying to figure out what HB 3 will mean for the district.

Residents could see a decrease in school property taxes as a result of HB 3, according to Leonard, who added residents under the age of 65 will likely pay less or an equal amount of property taxes when compared to 2018-19.

HB 3 is also likely to decrease the amount of money EISD will send back to Texas’ recapture system. Eanes’ recapture rate is set at 66%, but will likely decrease to 61%. The district sent about $102.1 million to recapture for the 2019-20 school year.

However, Chief Financial Officer Chris Scott believes the recapture rate will increase in the future, due to the apparent lack of sustainability in HB 3’s formula.

The recapture system, originally created as an attempt to equalize Texas' public education system, requires districts with high property value per student to send a portion of their property tax revenue back to the state.

The tax cap, as laid out in Senate Bill 2, limits property tax revenue growth at 2.5% year over year; any higher increase would require voter approval.

"Schools, at least in Texas, are predominantly funded by local property tax revenue. You can’t continue to cap those rates without providing additional funding," said Leonard, adding that currently, the state has no plan to make up for that loss.

Passage of HB 3—specifically its basic allotment increase rule—also mandated minimum salary increases. Each district received a different amount of money for those salary adjustments, with funds based district rates of socioeconomic status and growth.

Eanes received less money than Leander ISD, Lake Travis ISD and Austin ISD, according to Leonard’s presentation, but EISD ultimately decided on a 4.5% raise across the board.

Leonard recognized that in certain cases, teachers in neighboring districts deal with a more challenging population. “But my teachers," he said, "are driving the same roads, going to the same grocery stores and paying the same rent.”

Fiscal responsibility is important to the district and community. However, so are ideal class sizes, adequate learning materials and the ability to attract and retain talented staff, Leonard said.
SHARE THIS STORY