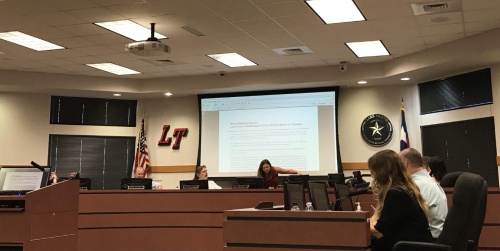 After receiving feedback from both the community and board, LTISD held a public hearing Aug. 21 on the proposed tax rate and budget for the 2019-20 school year.

The budget reflects a proposed tax rate of $1.3375 per $100 valuation, which is a decrease of .07 cents from the previous year.

The proposed budget also shows a decrease from the previous year, according to Johnny Hill assistant superintendent of business.

“Our budget is going down about $4 million dollars, a decrease of about 3%, that's really good,” said Hill, adding that the decrease is largely due to the school finance bill House Bill 3.

While both the budget and proposed tax are projected to decrease, the budget still encompasses staff raises, the construction costs of Bee Cave Middle School, and the hiring of new staff, according to Hill.

The budget reflects a 5.3% salary increase for teachers, librarians, nurses and counselors with at least five years of experience, as well as a 4% increase for all other staff.

The budget showed a net estimated taxable value of $11.218 million and a total of $167.49 million in estimated tax revenues.