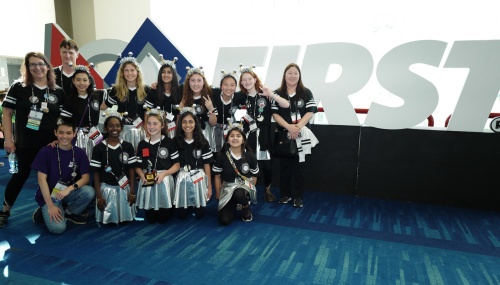 Club Oreo, an all-girls team from Westlake, won the FIRST Lego League trophy in this yearu2019s u201cInto Orbitu201d-themed competition to solve a problem relating to human, long-term travel in space.

Club Oreo, an all-girls For Inspiration and Recognition of Science and Technology Lego League robotics team from Westlake, competed at the end of April in the FIRST Houston World Championship against 108 teams from around the world and won the Champion’s Award Finalist trophy.

The 10 girls in Club Oreo, ages 12-14, attended the Houston World Championship for the second year in a row, a press release said.

FIRST Lego League teams design and build a robot out of a kit to accomplish missions on a themed competition field. They also research a problem and create an innovative solution to that problem, the release said. This year’s theme, "Into Orbit," challenged teams to solve a problem relating to human, long-term travel in space.

The team also worked with a local company, Hypersciences, to launch a sample of their microbes into space, thereby proving the viability of their solution.

“Their solution for Mars has potential to help here on Earth as well,” Emily McKaskle, FIRST Lego League head coach, said in the release. “They have shared their solution with Osa Conservation, a non-profit working to restore the fragile soil of the Osa Peninsula in the rainforests of Costa Rica.”

The team will also be talking about their solution and robot at Lady Bird Johnson Wildflower Center’s Nature Night "Life on the Prairie" on June 20.

For more information on FIRST, visit www.firstinspires.org. Follow Club Oreo on social media @fllcluboreo, and check out a video of the robot here.