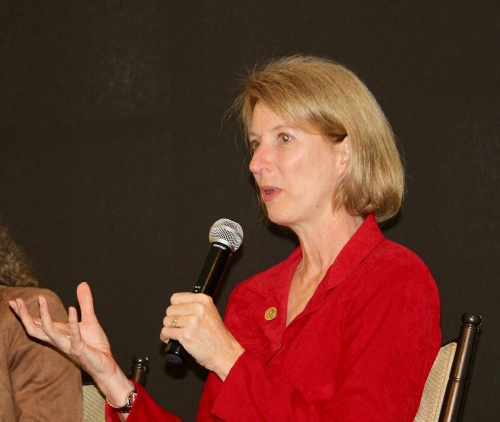 State Rep. Vikki Goodwin, D-Austin, shown speaking at a community luncheon hosted by the Westlake Chamber of Commerce, has introduced a traffic safety bill to the state Legislature.

The untimely death of a local doctor in October has led to a proposed bill making the rounds in the Texas Legislature.

State Rep. Vikki Goodwin, D-Austin, introduced House Bill 2814 to the Legislature on March 1. It is a bill she said was inspired by a highway safety advocacy group called Safer71 based out of the Sweetwater area in western Travis County.

Safer71 emerged in November following the fatal traffic accident of Dr. Michael Babineaux. Goodwin said she was inspired by talks with members of Safer71 and other groups to do something about traffic safety.

“The more I talked to constituents, the more I heard about not just Hwy. 71 having safety issues, but also [RM] 620 and Bee Cave,” Goodwin said. "So I figured, if we’re having so many traffic accidents, perhaps it would be good to give the Texas Department of Transportation a tool that they could use statewide to help make the roads safer.”

The proposed bill draws from existing legislation in other states to create what are called safety corridors in which traffic violations carry increased fines. Goodwin said she has been talking with other state representatives who are having the same traffic issues, largely due to all of the growth coming to Texas.

Safer71 President Greg Short said he and other members met with Goodwin in December to discuss solutions to traffic issues not only on Hwy. 71 but on other roads. HB 2814 is a milder version of similar laws in other states, he said.

“Some of the other states also include zero tolerance so that you can’t even get warnings,” Short said. “This doesn’t have any of those provisions.”

Short said the goal of establishing a safety corridor is to achieve an ecosystem of self-correction in which motorists change their behavior over time. If the bill passes this year, he said TxDOT would have the ability to look at areas determined to have high traffic fatality rates and potentially designate those areas as safety corridors.

A sign would be placed at the beginning and end of the corridors, and traffic violations within those areas would double. Any revenue collected from the fines would then double back to the relevant precincts or other systems appropriated to each safety corridor.

“And that is not just speeding. That could be distracted driving, reckless driving, [and] any traffic violation within that zone would qualify for a double fine,” Short said. “Those funds typically are designated back to the precincts to help pay for the salaries of additional law enforcement personnel to help police that safety corridor and maintain enforcement.”

Beyond the bill’s introduction to the state Legislature March 1, the proposed legislation has already made at least one appearance in an official local government forum in western Travis County.

During the March 12 Bee Cave City Council meeting, an agenda item calling for a resolution supporting HB 2814 was postponed for reasons unrelated to the issue, and could appear on council’s next agenda for the March 26 meeting.

Goodwin said she hopes to have the bill move to the house floor of the state Legislature following committee hearings slated for early April.