Stories to look out for in 2019: As western Travis County grows, so do traffic woes 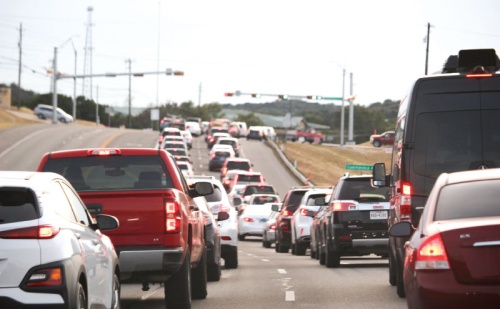 Rush hour traffic in western Travis County continues to be an issue for commuters.

For some residents of Sweetwater, a community several miles west of Bee Cave off Hwy. 71, the need for activism came following a late October traffic fatality.

Michael James Babineaux, who lived in Sweetwater, died in a car wreck on Hwy. 71. He was traveling eastbound, and another vehicle traveling west lost control, skidded into oncoming traffic and collided with him, resulting in his death. He was 36.

This was the breaking point for Greg Short, who lives in the same neighborhood that Babineaux did.

“After the most recent death, which directly impacted us here in Sweetwater … a number of us got together to discuss what we want to accomplish,” Short said. “We don’t want to move, but at the same time we feel like we’re stuck—the only way in and out of our communities being a road that people are dying on.”

According to the most recent statistics from the Texas Department of Transportation, fatalities from automobile accidents along Hwy. 71, from where it splits with Hwy. 290 to where it intersects with Hwy. 281 at Marble Falls, totaled seven in 2018. The previous year the number was three.

That statistic combined with Babineaux’s death led to Short forming a citizen traffic safety group called Safer71. It is just one example of community activism taking place in the Lake Travis-Westlake area that focuses on traffic safety.

As the population of western Travis County grows, citizens, transportation officials and law-enforcement officers are ramping up discussions and strategies to mitigate traffic-related incidents.

Safety strategies for Hwy. 71 and beyond

Bee Cave Police Chief Gary Miller met with Short during a talk with Mayor Monty Parker and City Manager Clint Garza almost immediately after the early November formation of Safer71. The meeting was centered on heightened safety on Hwy. 71.

Three of the five fatal accidents in Bee Cave since 2015 have been on Hwy. 71, Miller said.

Coupled with that, Miller said heavier traffic leads to delays, which lead to driving behaviors that can result in accidents.

Sweetwater resident and Safer71 member Karen Schultz said she is familiar with how much western Travis County has grown in the last several years. Prior to living in Sweetwater, she lived in the Bee Cave and Lakeway areas for 23 years.

Though not in her specific section of Hwy. 71, efforts are underway in the Bee Cave portion to increase law-enforcement presence on the thoroughfare.

The Bee Cave Police Department was recently awarded a grant through TxDOT that kicked in for the 2018-19 budget year. It is called a Selective Traffic Enforcement Program, or STEP, grant, and Miller said it funded overtime for his officers to heighten their presence at Bee Cave’s busiest intersections throughout the year.

“It’s not a tremendous amount of money,” he said. “It’s about $11,000 over the fiscal year, but it is a step in adding visibility and hopefully reducing accidents along Hwy. 71.”

Updated infrastructure and other measures

Short said Safer71’s philosophy is three-pronged and invokes engineering, enforcement and education. It is a format he said he adopted from TxDOT. One of the goals of Safer71 is to improve safety-boosting infrastructure along the highway.

Short said since engaging in further talks with TxDOT officials, he realizes that adding dividers or medians is much more of long-term goal that involves reclassifying Hwy. 71, but he said he is pleased with ongoing conversations with TxDOT regarding traffic concerns.

District Engineer for TxDOT Austin Terry McCoy concurred that at this point concrete barriers are not feasible for West Hwy. 71 for many reasons, including the consistent increase in development in the area as well as the existence of driveways on either side of the road.

McCoy said that by no means is TxDOT not committed to making Hwy. 71 safer, but all considerations for road improvements have to come on a case-by-case basis and involve specific issues and concerns such as accidents and topography, all of which tally into a formula for which roads are allotted which updates.

“There are plans for [Hwy.] 71, but none of them include a concrete barrier down the middle of [Hwy.] 71,” McCoy said. “We have several different resurfacing projects that we’re working on. We accelerated that work from 2020 and let that this past summer in 2018.”

TxDOT is also working on projects for Hwy. 71 that run west up to Spicewood, including asphalt improvements and the advancement of a middle turn lane continuing west. McCoy said these operations count as safety and improvement projects, and that something as seemingly simple as a middle turn lane can add much to the safety of a high-speed thoroughfare, including providing a safe haven for drivers turning left.

“The other thing it does is it provides a separation from opposite directions of travel as well,” McCoy said. “So, you have a 12- to 14- foot separation between folks going east and folks going west.”

For Lakeway resident Dennis Hogan, it was the Nov. 16 death of David Case that got him moving on traffic safety.

Case was on his bicycle at the intersection of Lohman’s Crossing and RM 620 when a man in a truck hit him Nov. 3, severely injuring him to the point that he eventually died.

Hogan said he knew and liked Case, who worked at the Randalls in Lakeway and held a Ph.D. in behavioral psychology.

“I had not been campaigning for traffic safety prior to that,” Hogan said. “But I got to thinking about it, and like everyone else, I use a car to drive, and I see people in my neighborhood walking their dogs, and they’ve got black on and no lights or reflective clothing, and it’s very hard to see them.”

Hogan does not yet have a formal group with regard to driver and pedestrian safety outreach in Lakeway, but he has been speaking at city meetings in an effort to ramp up awareness and push for an initiative that encourages pedestrian use of reflective, bright clothing.

Due in part to Hogan’s efforts, officials are now looking into how to help spread awareness. Lakeway Public Information Officer Devin Monk updated City Council at its Dec. 17 meeting, stating that he has been working on finding information on reflective wear and distracted driving.

Monk reported, among other findings, that there are a lot of distracted drivers in the city, and high-visibility equipment combined with motion helps alert drivers.

Lakeway Police Chief Todd Radford agrees personal responsibility is crucial for combatting distracted and other forms of bad driving as well as maintaining the overall safety of citizens.

“We are getting a lot more people in this area—increased population density, increased traffic density,” Radford said. “Individuals have to decide that they’re driving a 5,000-pound deadly weapon. When you’re doing that, you have to be diligent and pay attention to the rules of the road.”

Radford also said citizen involvement like Hogan’s is beneficial and helps bring needed attention to the issue of traffic safety.

“I truly want to see everyone be safe on the roads and their families to be safe, and I don’t like the idea of having to over-legislate when it simply comes down to taking an extra moment, an extra second to just be safer,” Radford said.

In the time since Safer71 began, members have met with many officials in the Lake Travis area, including mayors, city managers, county commissioners, TxDOT and Capital Area Metropolitan Planning Organization representatives, and law-enforcement officers.

Short said the main goal for Safer71 is to continue engaging in trilateral talks with the county and TxDOT as well as working with both entities to develop an informative town-hall-type presentation that would be ready by spring 2019.

Short said Safer71 should hear back from officials soon about timelines for some of the easier requests.

In Lakeway, Hogan said he is hoping to turn his activism into a large enough group of people that could campaign for effective change surrounding pedestrian and vehicular safety.

“It’s something that has to build and evolve, but it takes people to do that,” Hogan said.
SHARE THIS STORY