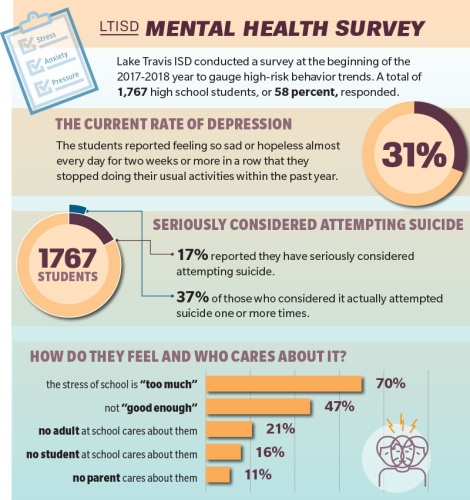 The mental health of children and adolescents in the Lake Travis-Westlake area—and the U.S.—is not a new concern. But action measures like Eanes ISD's wellness survey and Lake Travis ISD’s youth risk behavior survey are being implemented to show the extent of the problem and to continue seeking ways to solve it.

LTISD conducted the survey in January to narrow its focus on prevention and intervention and develop a plan on how to better spend time and resources on improving students’ mental health, Kathleen Hassenfratz, the district’s health and social programs coordinator, said.

“The results totally validated what we thought,” she said. “We’re not  seeing as much drug and alcohol use on campus, but we’re having kids say, ‘I’m not doing so great, can I get some help managing this stress load?’”

The social and emotional health of students is also a priority for Eanes ISD.

“They have no way to cope with stress; they don’t know how,” Katie Bryant, student support counselor, said. “We have kids that suffer through it—sometimes they make it to us and sometimes they don’t—they just think it’s part of adolescence and high school.”

Bryant is on a children’s mental health board that consists of representatives from every school district in Travis County. She said they are all seeing a rise in mental health issues.

“It’s not news there are mental health issues, but the lack of ability to cope with them is a problem,” she said. “There is a lot happening in this county regarding awareness and the need for new resources and programming. Our kids need it; they are in crisis.”


Programs to address the problem

A forum on mental health in EISD was hosted by the district June 5. Linda Rawlings, director of student support services and social emotional learning, said she hopes it is the first of many.

“We wanted to bring a variety of people—politicians, business owners, medical professionals, parents —who work with students together to talk with district personnel about issues our kids face today,” Rawlings said. “We want to look at how we are addressing those issues and are hoping for a continued partnership with some of the people in the community.”

Rawlings said she envisions interested participants creating a steering committee and hosting several forums a year to talk about how to support each other in continued efforts to improve students’ mental well-being. But why now?

“Social-emotional learning is big on the radar—nationally, statewide, locally,” Rawlings said. “We all recognize Westlake is a highly academic school, but we need to make sure kids have a well-rounded skill set that is not just academic so they can navigate things in the world that aren’t in a textbook.”

Joseph Asfouri, an incoming senior at Westlake High School, agreed that stress and anxiety often stem from a gradecentric and collegecentric environment.

“Our student body is majority perfectionists, and I don’t think that’s specific to Westlake,” Asfouri said. “What we’ve been hearing is that average isn’t good enough. Everyone is motivated by getting into a good college—that’s the term everyone uses, ‘a good college’— and the mania of playing a game that consists of doing as many AP courses and extracurricular activities as possible, all to build a resume.”

Starting in late elementary school or middle school, students are taught that everything they do will have an implication on how a college acceptance board sees them when they apply, Asfouri said.

Learning happens when mistakes are made, he continued, but students are afraid to make mistakes because the result would be a bad grade, which could ruin a future they have been told to spend six years fixated on, which causes anxiety.

Asfouri said since starting high school, he has learned how to talk about and identify social emotional learning, but has not felt the climate change, so he and a group of peers are starting something new.

As part of Challenge Success, a national program that emphasizes holistic well-being in school, Asfouri attended a conference at Stanford University in September, where he spoke on a student panel about mental health in schools and participated in workshops that examined different strategies to promote positive change.

“One of them was about ‘peer first responders,’” he said. “Now we’re getting ready to start our own peer counseling club at Westlake. We’ve spent the last month talking to schools around the country that have similar, well-established programs. We’ll keep researching and planning all summer, and at the beginning of next year, we’ll implement the club.”

The peer counseling club will consist of after-school meetings where members can learn how to talk to their peers, what confidentiality is and how to notice red flags in student behavior that should be dealt with by an adult.

Asfouri said he imagines some students are more likely to talk with someone they relate to before seeking out a counselor, and peer discussion on stress, depression and anxiety might shift the existing culture of bottling it all up.

LTISD is also taking a team approach to improving mental health in schools. It has a school health advisory council that consists of two-thirds parents and community members and one-third district employees.

“It has representation from the chief of police, a local pediatrician, multiple therapists and a faith-based clergy,” Hassenfratz said. “We created this circle the district can count on. We don’t have a hard and fast plan on how to utilize these people yet, but they’re all saying, ‘Put me to work, tell me what to do.’”

Hassenfratz said the worst thing for a sustainable and successful new program would be to not analyze exactly what they want to do.

“We’re excited to get something in place,” she said regarding ways to address the results of the recent survey. “But we’re not wanting to jump in too quick. It’s the front end where we could probably use more support, though, we need to focus on prevention.”

Figuring out how to support high school kids “without being in their face” is also something the district is focusing on, Hassenfratz said. She said a big challenge right now is making sure kids understand teachers are their allies.

Both districts have mentor and peer-assisted leadership programs in place and are working to bring in more counselors. They also both expressed the importance of making sure their teachers and administrators stay balanced and fulfilled psychologically.

Young people have always had stressors, EISD’s Rawlings said, but students’ lives are more complicated than they used to be.

“It’s everything from courses getting more rigorous every year to access to instantaneous social media,” she said. “We need to help them figure out how to balance their school life and take care of their personal needs—that’s what our programming is trying to focus on.”

Bryant agreed there is no easy answer or one fix.

“I think you’re going to continue to see more emphasis on the whole child,” she said.

Asfouri said he realizes the new peer counseling club’s success will rely on whether students use the program.

“Around here, there’s a stigma,” he said. “If someone is anxious or depressed, it’s kept quiet.”

Asfouri said he imagines change being several years down the road, as it will take time for such a different kind of club and ideals to become established and known to the community.