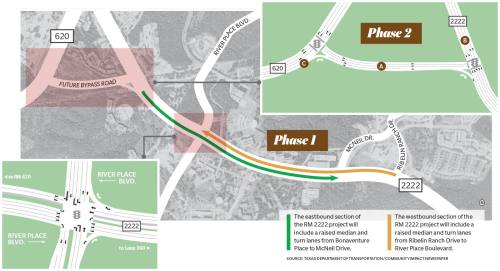 After a number of studies and public hearings, construction is slated to begin this fall on a major road improvement project aimed at increasing the capacity of RM 2222 at RM 620 in Austin’s Four Points community in order to meet projected future traffic volumes. The project is slated to last two years and will cost $20.3 million—$7 million of which is coming from a 2016 city of Austin bond. The remainder will come from the Texas Department of Transportation, officials said.

For many who live and work in the growing area, the fix cannot come soon enough.

“Less talk and more action please!” Jill and Craig Wingrove wrote last October in a public submission to the Texas Department of Transportation. The couple believes a two-year timeline is unnecessarily long for the size of the proposed project and the “dire needs of the community” related to collisions, feared declines in property values and the anticipated increase in traffic volume.

But options appear limited. According to a January 2017 status report into the intersection’s future produced by the TxDOT, the long-term solution “will likely be elevated flyovers, [but] what is needed now is an interim solution that is affordable and quick to construct.”

A 2014 TxDOT traffic analysis indicated doing nothing in the area would by 2020 result in an increase in travel time per vehicle of 40 percent in the morning peak times and 59 percent in the afternoon peaks. Steiner Ranch residents whose neighborhood exit is a mile down RM 620 know this reality already.

“I can easily sit [in stop-and-go traffic] for 30 minutes just to get from Steiner Ranch to [RM] 2222 in the morning,” Brian Thompto, chairman of the Steiner Ranch Neighborhood Association told a TxDOT hearing last fall. “These improvements are absolutely needed to address this issue.”

The improvements Thompto referred to will begin this fall. TxDOT confirmed four years after conducting the initial traffic studies that work on the first of two phases of the bypass project can get underway. That included securing environmental clearances and funding. The task of moving utility lines will start to get underway later this summer, said Bobby Ramthun, TxDOT project manager.

"There's a great deal of congestion in that intersection. Hopefully construction [once completed] improves travel times through there. So we're getting close to getting it underway," Ramthun said.

The project is being split into two phases, both complete at the same time in 2020. The first part involves widening a section of RM 2222 to add a through lane in each direction. Adding a raised concrete median with turn bays is seen as a key improvement to control the movement of traffic to improve traffic flow and travel times. Traffic signal timing plans will also be optimized as part of the project to reduce congestion at RM 620 and RM 2222.

The second phase will involve building the two-way connector road from RM 620 a mile north of Steiner Ranch Boulevard to RM 2222. The project calls for adding an additional northbound merge lane on RM 620 to the connector.

Other motorists told TxDOT even this so-called interim fix is insufficient.

“I think it's wonderful that we're talking about this problem, but, frankly, at the end of the day, I don't think a bypass road is really going to help the solution. I think it's just going to move the [congestion] problem somewhere else [like farther down RM 2222],” said Jeremy Linton, a driver on RM 2222.

For first responders though, improved mobility means more opportunity to save lives.

“Over time we've had obviously the [September 2011] Steiner Ranch fires that created evacuation issues,” Lake Travis Fire Rescue Chief Robert Abbott  said at the October public hearing. “[But] I want to focus on the safety implications that this [bypass project] will help [with] within the Four Points area going from Comanche [Trail] down to Four Points and then down [RM] 2222.

“At any given time, we could have an accident at any of these major intersections. Just one accident can delay our response to another emergency by 10 to 15 minutes. There are times when we have multiple accidents going on at Four Points, [RM] 2222, River Place and Comanche Trail on a busy day. A lot of us have been impacted by that. So we stand behind this project.”

But local business owners are already planning for the short- to medium-term costs they anticipate the two-year long construction will bring.

“It’s going to be a worse pain during the construction process, so our clients are just going to have to be cognizant of getting here or leaving their house a little bit earlier," said Xavier Ramirez, owner of UR Fit Wellness Center, adding he is concerned about some clients simply choosing not to head into the area, acknowledging in Austin any local trip longer than 30 minutes is too much for many people.

Nearby, the longtime manager of a nail salon said he is also planning contingencies mixed with positive thinking around the looming construction.

“It’s going to be painful. I didn’t know that [road work] was coming in this fall. That’s crazy,” said Duy Tran, manager at Deluxe Nails and Spa.

“We are concerned. But then again, if you’re stuck and don’t want to sit in traffic, you can come up here, grab a cocktail and get your toes done. It works!”

The roadway expansion also means buyouts of businesses including Heritage Body and Frame where the connector will emerge onto RM 2222. Owner Jeff Borkland told Community Impact Newspaper he could not comment since he was still in talks with TxDOT at press time.

Immediately to the west, Skotz Inc., a welding shop at 11303 RM 2222, is also affected by the road improvements, which will first necessitate taking the front 30 feet of the property, according to one staff member who did not want to be named.

“[The RM 2222 road expansion] kills our business. Trucks [also] won’t be able to get in here with a median. We have to move. We have been here 50 years. It doesn’t make any sense,” the employee said.

Other residents who spoke during public comment periods argued against more construction until there is an alternate way for students to get to nearby Vandegrift High School and Four Points Middle School.

On the plus side, the RM 2222 bypass project includes improvements to bicycle and pedestrian access in the form of a continuous sidewalk along eastbound RM 2222 from RM 620 to Bonaventure Place and the new bypass, TxDOT records showed.