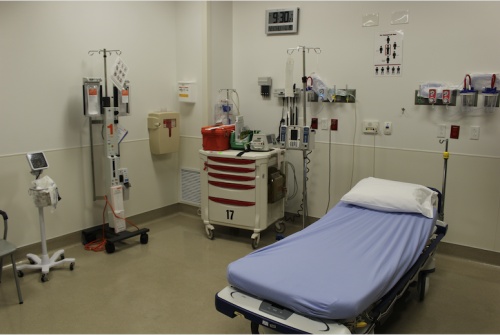 One of the trauma rooms at Baylor Scott & White - Lakeway is ready to receive an ill patient.

For the first time, Lakeway area residents have access to a nearby medical center that is now certified in best in-class practices to handle most serious injuries. That includes those that rise to the level of trauma—including falls, burns and injuries sustained in serious motor vehicle collisions.

“The [quality of] care really hasn’t changed. But now we make sure whomever sees that patient, they have the correct education [and equipment on hand] to treat them as a trauma patient,” said Rhonda Manor Coombes, the hospital’s trauma program manager.

There are also policies to help ensure patients do not fall through the cracks, said Dr. Brian Spears, BS&W-Lakeway’s director of emergency medicine.

“We have procedures in place after the fact to pull up those patient charts and say this is what happened here, and let’s make this even better,” he said. “Before, we weren’t looking at numbers; we were just saying, for example, that was a hip fracture, and we took care of it.” Once stabilized, patients needing advanced care may still be transported 30-40 minutes away to BS&W trauma centers in Round Rock. Other options include the BS&W facility in Temple or St. David’s South Austin Medical Center, both Level II trauma centers with subspecialist staff surgeons who can perform delicate repairs on eyes or hands, for example.

“The biggest drive for us moving toward trauma designation is that there was nothing out here,” Spears said. “We wanted to be that critical access for some of the patients west of us.”

BS&W-Lakeway has its own specialized staff in the form of four neurosurgeons who can perform spinal, brain and related operations. There are also two dedicated paramedic teams from Austin-Travis County Emergency Medical Services posted at the Lakeway medical campus who respond to trauma-related emergency calls.

Receiving the Level IV designation at BS&W- Lakeway (the first or basic designation in Texas) is no quick feat. A yearlong process collecting data, conducting staff training and improving practices culminated in May when surveyor teams from the state visited to watch the path that care patients took once admitted. The designation was granted last month, according to Coombes.

In a few years, the Lakeway medical center staff may apply for a higher designation, which would mean recruiting more specialized staff, such as hand and eye surgeons. For now, medical managers said they are content to make sure all the pieces fit with the current designation.

“It’s evidence of where we’re moving--especially for BS&W-Lakeway-- and it’s a promise of this is what we’re going to become,” Spears said.