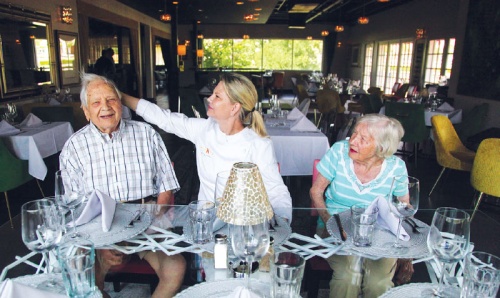 Dzintra Dzenis, owner of Plate by Dzintra, fixes her fatheru2019s hair on his 97th birthday. The couple, Visvaldis (on the left) and Sigrida (on the right) Dzenis, raised four children including Dzintra.

For Dzintra Dzenis, organic eating has never been a trendy lifestyle. It was the life she always had growing up.

In summer months, young Dzenis would garden and grow crops with her parents on the 600-acre farm they owned in New York state. “Everything we ate was pretty much self-grown,” she said.

Natural food became a habit for Dzenis that she now runs her ownrestaurant—Plate by Dzintra—­­­ in Bee Cave. The 6,500-square-foot restaurant offers a variety of cuisine: French, Japanese and Thai.

Dzenis’ passion about running a catering business began at a young age. Her mom, who Dzenis calls “the queen of leftovers,” taught her how to cook. And dad, who came to America from Latvia and industrialized mozzarella cheese in the U.S., was the big entrepreneur in her family who showed her how to do business.

The idea of making fancy food struck her when she got tired of leftovers, Dzenis said. She started her first business—Dzintra’s Desserts—right after high school, when she made cheesecakes with her own recipe. Even when she landed her first job in public relations in New York City, where she had to set her cooking dreams aside, she would make cheesecakes for her colleagues once in a while.

After years of desk jobs, she finally made a decision to study pastry and cuisine at La Cordon Bleu in Paris. Planning to settle down back in the U.S., Dzenis eventually eyed Austin in 2007. “[At first I thought] they’re all cowboys and they drive pickup trucks,” Dzenis joked. “But the food isn’t that good yet. So that was a perfect niche, because it had a place for me to really plant some roots and make something very special.”

Integrating “a European flair, Texas hospitality” and her family’s passion, Dzenis opened up her “baby Plate” seven years ago. The business grew bigger over the years, allowing Dzenis to move her business right across a literal pond to the plat where the new “Plate” now lies.

“Anything could be on a plate,” Dzenis said. “It’s self-explanatory. Just come to Plate, you know.”
SHARE THIS STORY