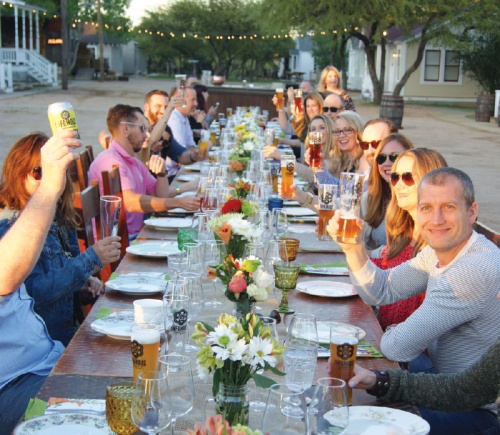 If there was a way to create an intimate dining experience for 40-plus people, Austin’s OneLongTable is doing it just about every month.

Business co-owners Jeff Darby and wife, Vanessa, who live in Steiner Ranch, began organizing regular pop-up dinner events about 18 months ago. Pop-up dinners typically involve partnering with local chefs and other food and drink providers in unique locations, including outdoors under the stars, such as a recent event at Bee Cave’s Star Hill Ranch.

Now, 20 events later the pair said they are re-energizing a trend familiar to longtime “underground” diners in Central Texas.

“I’m a foodie [and home chef],” Jeff said. “We researched pop-ups, and they had kind of died in Austin. “[For us,] it’s a success so far,” adding the events feature chefs from locales that Lake Travis-area diners might not know about.

Jeff, an Austin business attorney during the day and Vanessa, a wedding planner for 12 years, saw a chance to combine their loves of fine food and small-town atmospheres.

“We’re the backbone; we just put it all together, showcasing the chefs,” Vanessa said. “We don’t even tell them what to do; [they have] free rein.”

Jeff said the next phase for their “passion project” includes a drive out of Travis County to the tiny community of Hye, near Johnson City in the heart of the Hill Country wine trail.

“We want to start getting to the wineries [and distilleries] to do special dinners for their wine club members,” he said. “The idea is, people clamor for the tickets, and if they don’t make this one, they make the next.”