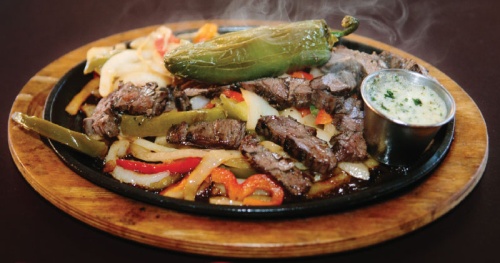 The manager of Vaqueros Cafe & Cantina calls his restaurant a hidden gem in West Lake Hills.

The interior is full of 19th-century artifacts and decor, with much attention and focus put into the aesthetics of the surroundings as well as the menu, Rudy Casillas said.

“The more rustic, the better,” Casillas said, pointing out wall paneling made with reclaimed wood from a Texas barn.

A mural runs along a wooden fence outside one side of the restaurant. It tells the story of a day in the life of a vaquero, Spanish for cowboy or cattle driver.

The restaurant was opened in August of last year by Bobby Steiner and Don Burdette of Steiner Ranch Steakhouse, two years after Tres Amigos, the restaurant that used to occupy the facility, shut down.

The Vaqueros team prides itself on food, service and overall aesthetics, according to Casillas.

“All three have to be in line,” he said. “That’s what sets us apart. We are a traditional Tex-Mex restaurant but maintain a lot of influences from authentic, traditional Mexican cuisine.”

Ensuring the rice and beans and other sides are just as delicious and complementary to the main protein is another priority, Casillas said.

“We aren’t trying to reinvent the wheel,” he said. “We know everybody serves tacos, fajitas and rice and beans, but we want ours to be the most flavorful and fresh, for a good price. I strongly believe that when you walk out of here, you feel like you got real value.”

Vaqueros also serves breakfast tacos and Sunday brunch. In March the restaurant launched live music on the patio and hopes to eventually offer it every day of the week.

“As a father of two teens, I know the work involved [in raising them],” Casillas said. “We felt that was the best way to say thank you to the community [where we do business].”